Justin Timberlake fans! The TROLLS WORLD TOUR new posters are here! Queen Poppy and Branch make a surprising discovery — there are other Troll worlds beyond their own, and their distinct differences create big clashes between these various tribes. When a mysterious threat puts all of the Trolls across the land in danger, Poppy, Branch, and their band of friends must embark on an epic quest to create harmony among the feuding Trolls to unite them against certain doom 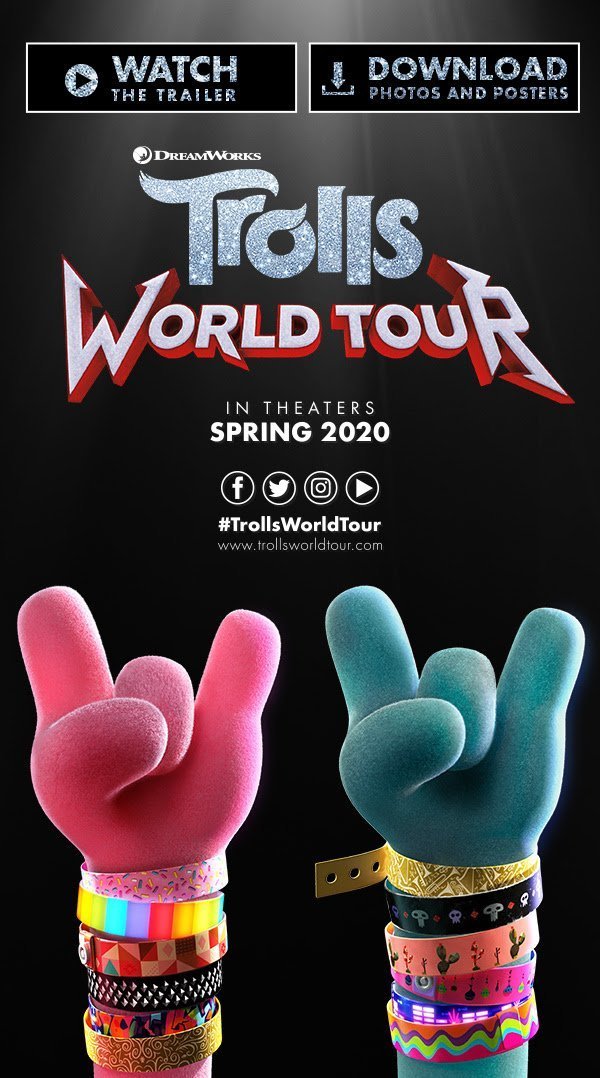 Anna Kendrick and Justin Timberlake, along with the rest of the cast, debuted their character posters for DreamWorks Animation’s TROLLS WORLD TOUR, They return in an all-star sequel to DreamWorks Animation’s 2016 musical hit: Trolls World Tour. In an adventure that will take them well beyond what they’ve known before, Poppy (Kendrick) and Branch (Timberlake) discover that they are but one of six different Troll tribes scattered over six different lands and devoted to six different kinds of music: Funk, Country, Techno, Classical, Pop, and Rock. Their world is about to get a lot bigger and a whole lot louder.

A member of hard-rock royalty, Queen Barb (Rachel Bloom), aided by her father King Thrash (Ozzy Osbourne), wants to destroy all other kinds of music to let rock reign supreme. With the fate of the world at stake, Poppy and Branch, along with their friends — Biggie (James Corden), Chenille (Caroline Hjelt), Satin (Aino Jawo), Cooper (Ron Funches) and Guy Diamond (Kunal Nayyar) — set out to visit all the other lands to unify the Trolls in harmony against Barb, who’s looking to upstage them all.

Trolls World Tour is directed by Walt Dohrn, who served as co-director on Trolls and is produced by returning producer Gina Shay. The film is co-directed by David P. Smith and co-produced by Kelly Cooney Cilella, both of whom worked on the first Trolls. Trolls World Tour will also feature original music by Justin Timberlake, who earned an Oscar® nomination for his song for 2016’s Trolls, “Can’t Stop the Feeling!,” and a score by Theodore Shapiro (2016’s Ghostbusters, The Devil Wears Prada).

Follow on social media and stay up to date!