Disclosure: This post is part of our all-expense-paid trip invite from Paramount to New York City in exchange for coverage. However, opinions are 100% mine.

Clifford the Big Red Dog movie brings back so many great memories of my daughter when she was a child. Getting invited to the Clifford the Big Red Dog movie set which will be released on November 2020, was epic! I wasn’t able to personally attend due to a previous commitment, but our contributor Lisa and her son Nick did! Nick grew up watching Clifford and reading all of the books, so to say they were excited about this trip. It wasn’t really *that* long ago, but when Lisa first learned about this, evoked her memory. 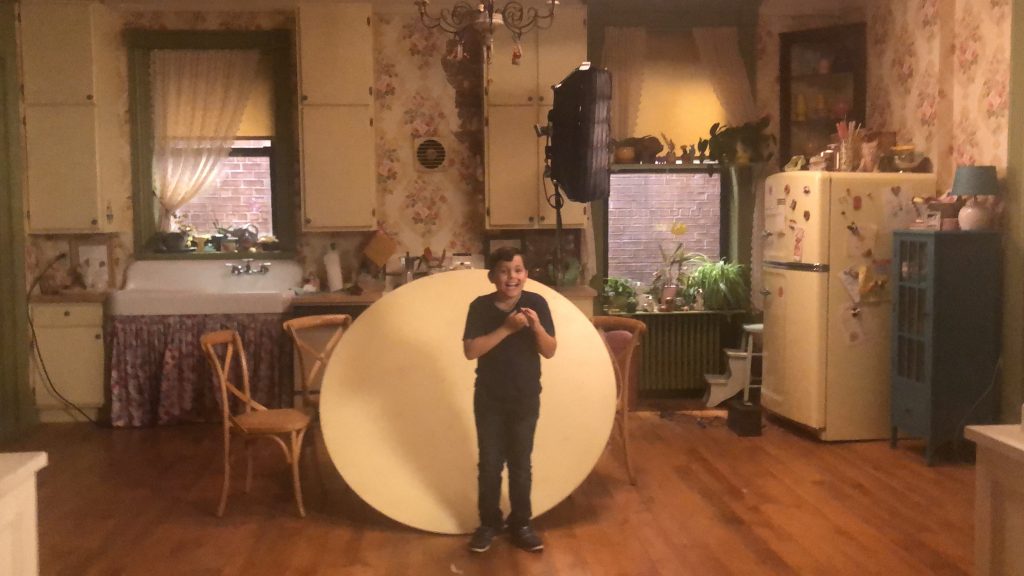 Reading to Nick Clifford books as his nighttime story, was nostalgia prior to this amazing visit. Lisa didn’t know much about the upcoming Clifford the Big Red Dog movie adaptation. So she quickly got online to familiarize herself with what’s what. She was *floored* by the cast…. Sienna Guillory?!  OMG, she was great in Resident Evil…Jack Whitehall – the ‘King of Comedy’ himself! Darby Camp? Nick *absolutely loved* her in The Christmas Chronicles…and John Cleese, Rosie Perez, David Alan Grier, Russell Peters…the list went on and on and they couldn’t believe how many amazingly talented actors were in this cast!

At the Clifford the Big Red Dog Movie Set

They lived in New York but for Nick, this was his first time ON AN AIRPLANE! They arrived in NYC on Sunday, went straight to the hotel in TIMES SQUARE! Talk about location, location! 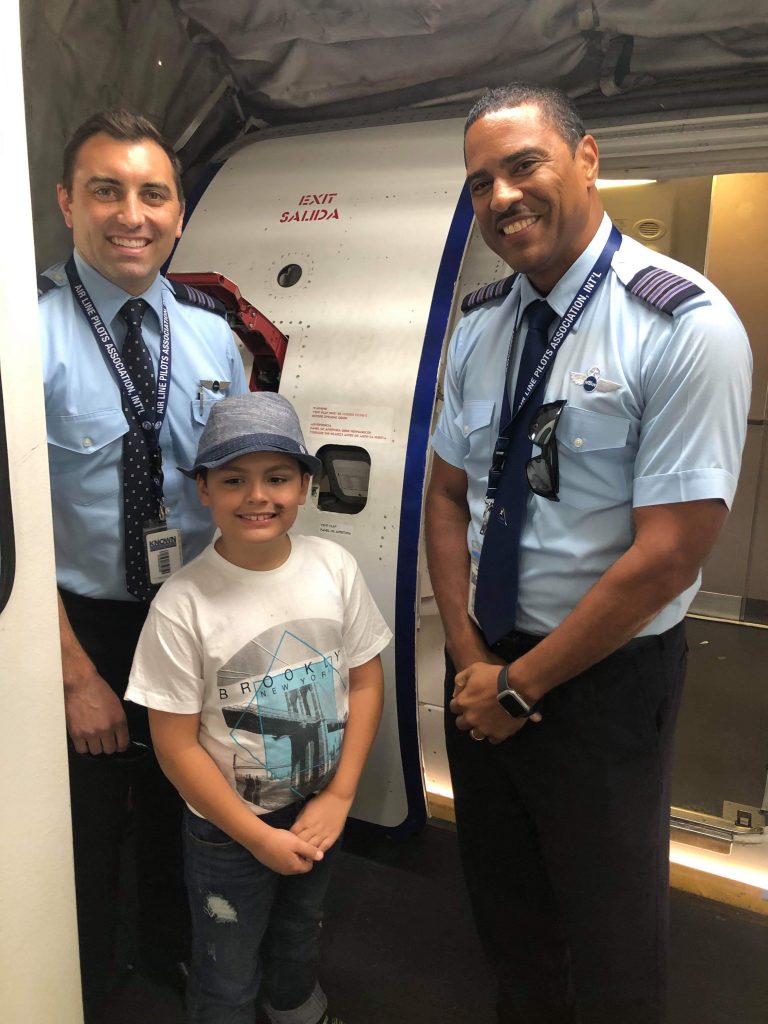 Once at the studios, they were taken to the Red room and later to view Emily’s apartment in NYC where they watched live as they shot a scene! Nick was so excited about it all!

It was quite an interesting and informational meeting with producer Jordan Kerner. He informed them of so many great details on how the film came into production and what to expect. As they mingled with the crew, Nick tells Lisa: “You know, if I became an actor and become famous, you could eat stuffed artichokes for lunch every day when you visit me on the set.” I take it he loved the lunch menu. He also continued to say how cool it was going to be to see his old pal Clifford, but “for real, not just animated.”

While walking through the studio, filled with props, camera equipment and all sorts of building equipment, all of a sudden you walk up a small set of stairs and BOOM! You’re in Emily Elizabeth’s building! There was even a small planter of flowers right outside her apartment door. When we walk in you’re standing inside a mid-century NY apartment. The knocked over kitchen table was a surprise to Nick: “let’s pretend I knocked over the table and now I’m in trouble!” So we did.  And we walked from room to room, just marveling at the level of detail it took in crafting and designing every square inch. 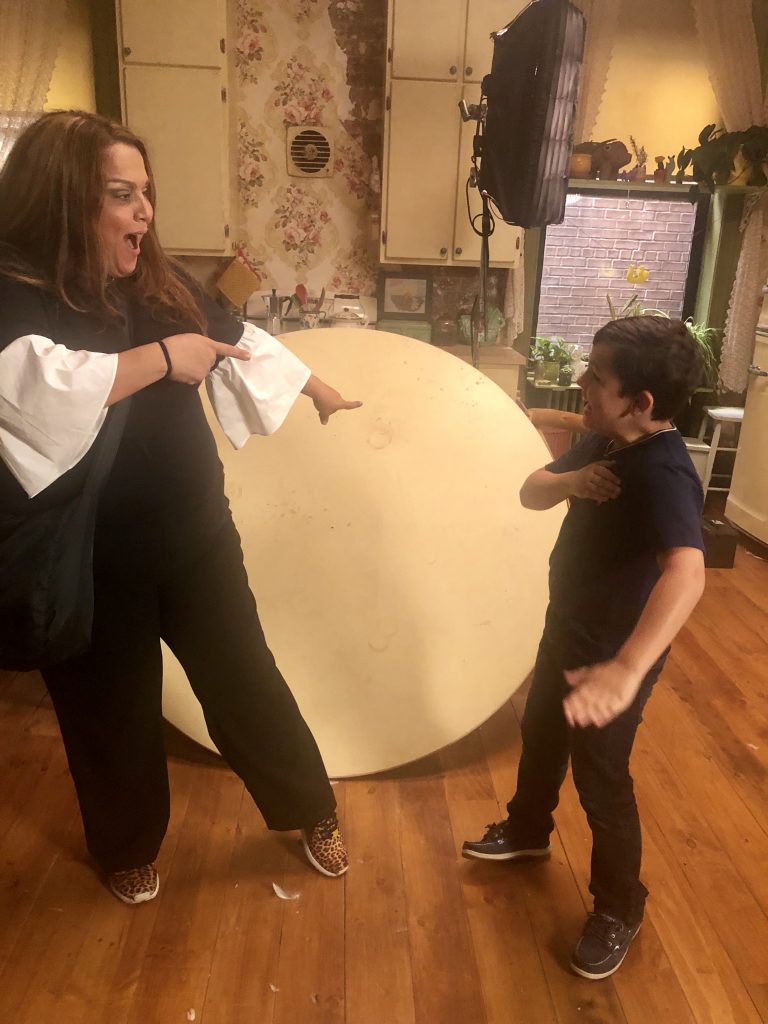 It was also pretty surreal to think of the theatrical greatness and talent that had stood exactly where they were walking. They walked from room to room, just soaking it all in. Lisa is such a fangirl. It. Was. That. Awesome. Nick kept looking out the faux-window to the city backdrop. ‘It all looks so real!’ he kept saying repeatedly.  Yeah kid, join the club. Because walking through that apartment?

Speaking with the Actors and Producer

They also got the *amazing* opportunity to speak in-depth with Izaac Wang, Jack Whitehall, Darby Camp, and Producer Jordan Kerner. They were each so delightful, entertaining, really informative, just all-around super cool, and amazing professionals in their craft. Nick loved talking and giggling with them. As I said, he didn’t once ask for his iPad the whole time, which tells you everything you need to know. 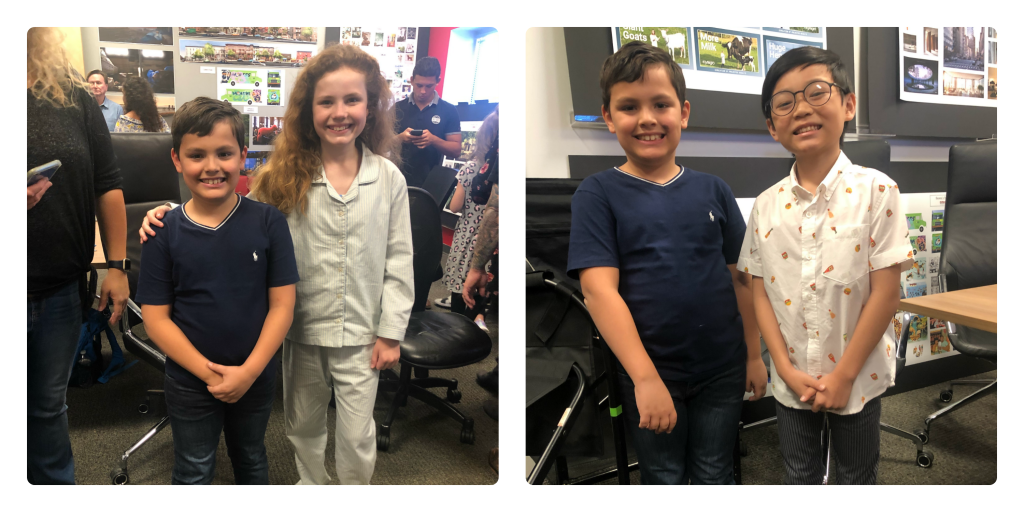 The coolest thing that I took from this movie was that it’s a well thought out, live-action adaptation that’s fit for all ages. It’s bringing Clifford to life.  I suspect it’s going to be one of those feel-good, warm-fuzzies-all-over movies that make you leave the theater with a smile on your face and in your heart.

After they got back on the bus to go back to the hotel, Lisa gives Nick his iPad, She closes her eyes for a bit. After about 30 minutes, out of nowhere, he shakes her shoulder to get her attention.

“I legit cannot wait to see this movie. Can you set a reminder on your phone for November 1, 2020?’

She sets the reminder and he went back to what he was doing. All in all, just a very, very cool day at the set of the Clifford the Big Red Dog movie.

Man’s best friend becomes his biggest one too as everyone’s favorite 25-foot-tall pup, “Clifford the Big Red Dog,” comes to the big screen in an all-new, live-action/animated comedy-adventure. Scholastic Media’s Deborah Forte will produce the film that is based on Scholastic’s best-selling book series by Norman Bridwell that has entertained families for generations.