Disclosure: This post is part of my all expense paid trip to Los Angeles, CA provided by Disney. However, typos, misspelled words and opinions are 100% mine.

D23 Expo was one of those amazing Bucket List trips that will forever and EVER remain fresh in my mind!  When I was invited to the Expo, I knew it would be an exciting time just because of all the teasers and rumors that had been swirling around Disney for months. However, as you can tell by my recent posts, I had no idea just HOW GREAT it would be. This year’s D23 Expo was filled with more excitement. The panels were fantastic, and the honoring of Stan Lee and Oprah Winfrey were something that is truly once in a lifetime experience. Read on for a rundown of all the amazing that I got the chance to be a part of. 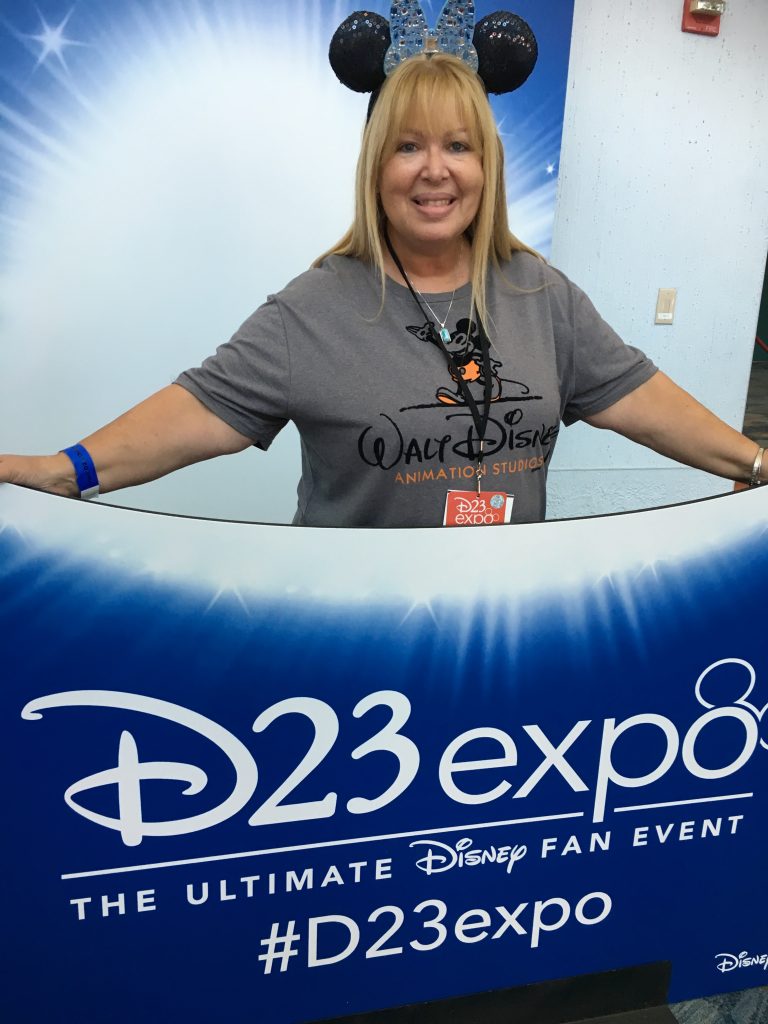 Before Disney invited me to the D23 Expo, I had considered going anyway- especially when I heard about the Walt Disney Archives Presents – A Pirate’s Life for Me: Disney’s Rascals, Scoundrels and Really Bad Eggs Exhibit! I have always been a fan of pirates, ever since my Peter Pan obsession at a young age, and knowing that there would be a big display featuring many of the pirates from Disney’s history, I just had to see it with my own eyes!

Wow. Just wow. These panels were absolutely amazing. With announcements for some incredibly huge upcoming films like The Avengers: Infinity War and classic reboots like DuckTales, these panels gave me all the feels. One second I was excited, the next, I was tearing up. And through it all, I was filled with a sense of wonder that can only come from bearing witness to epic Disney showcases. Seeing so many directors, producers, and actors throughout the panels gave me the chills….and I WAS THERE!

As part of the Expo, Stan Lee, Oprah Winfrey, Mark Hamill, and Whoopi Goldberg were honored at the Disney Legends Award ceremony, where they were officially inducted as Legends. 30 years ago, the first Disney Legends Awards was held, where Fred MacMurray of The Shaggy Dog, The Absent-Minded Professor, and The Happiest Millionaire fame was honored as the first legend in 1987. Nothing could have commemorated the 30th anniversary of the awards than inducting these talented stars as Legends.

As I watched Stan Lee take the stage, I was struck with such a sense of reverence for this man. As he stood there accepting his award, I reflected on the fact that if it were MacMurray him and his brilliant imagination, many of the amazing films we’ve enjoyed for the past several years would not be here. The characters would not be here. But he wasn’t all about himself. In classic, Stan Lee fashion, he gave credit where it was due, making sure to honor his writing partner and one of the greatest artists in comic book history, Jack Kirby. He is the father of Marvel Comics, and therefore the father of the Marvel Studios films. what struck me, even more, was his strength. He accepted his award not long after his beloved wife of 69 years, Joan, had passed.

When Oprah took the stage, you could feel the physical force of her presence from the front row to the back. As she accepted her award, it became apparent to me why she has been so successful. She is strong. She is powerful. But above all of that, she is not full of herself. We sat and listened to her acceptance speech, and I was just in awe.

This was the part of the D23 Expo that had me in full-on tears. Mark Hamill took the stage to accept his award, and he touched us all with his moving words regarding his sister, both on and off-screen, Carrie Fisher. When he spoke of her, there wasn’t a dry eye in the house.

Whoopi was a surprise for all of us. As she took the stage, she made sure to show us all her shoes, which featured a Minnie bow on the top. We all know she loves shoes, but she loves Disney just as much.

Walt Disney Archives “A Pirate’s Life for Me” Exhibit

Day 2 of the D23Expo for us included the Walt Disney Archives Presents – A Pirate’s Life for Me: Disney’s Rascals, Scoundrels, and Really Bad Eggs Exhibit! We were treated to a viewing of this expo all about pirates in the world of Disney. While there, we learned about the first mention of pirates in Walt Disney’s vast world of imagination. We also got a look at memorabilia that hadn’t been publicly accessible for decades. Rebecca Cline, a Disney archivist for over 20 years said that she’d been working on the exhibit for over a year.

A Lifelong Love of Pirates for Walt Disney

A Pirate’s Life for Me: Disney’s Rascals, Scoundrels, and Really Bad Eggs Exhibit was one of its own! Talk about Original Disney art! It gave us a look at Walt Disney’s love of pirates. They have been an integral part of his imaginative stories since well before the Pirates of the Caribbean ride. From Donald Duck comic books to Disney’s Treasure Island.

Walking through the exhibit I got to see incredibly amazing costumes worn by Captain Jack Sparrow and so much more! Saw items such paperwork that had Walt Disney’s signature, what? So many props from the Pirates of the Caribbean movies.

Remember the cute but dangerous coconut pirates, the Kakamora, from Moana? We got to see life-sized replicas of those adorable miscreants!

His love of pirates eventually led to the famed Pirates of the Caribbean ride that we all know and love. This, of course, led to the swashbuckling Disney movies of the same name. The pirate theme doesn’t stop there, however. We continue to see pirates in different Disney films.

We all also had the chance to be a part of the end scene from the Pirates of the Caribbean ride. It was so much fun!

Another amazing experience from this year’s D23 Expo was visiting the Disney Music Emporium. This pop-up store on the Expo floor featured collectible music-themed product from Disney. The sheer amount of music from Disney is staggering, and it was all on full display at the Emporium. And what’s even more exciting is that we all received our own copy of the Walt Disney Records The Legacy Collection Robin Hood. It’s a HUGE two-disc set that dropped while the Expo was going on. This amazing collection included previously unreleased demo and bonus tracks performed by Louis Prima. It’s fantastic, and it will have pride of place in my music collection.

While billed as a panel, this was really a concert and a fave of the expo. The legendary Alan Menken has been an integral part of Disney’s musical legacy for years, writing such classics as Be Our Guest and Under the Sea. He actually got his start with The Little Shop of Horrors. That’s right, he was the mind behind the man-eating plant musical! What struck me as utterly hilarious is the several of Menken’s relatives were dentists. If you don’t understand this reference, I urge you to watch The Little Shop of Horrors. It is SO good. What a voice!

Throughout this autobiographical concert, Menken shared stories about his life in between playing his piano – beautiful, I might add – and singing. Do you want to hear something both funny and surprising? This man who writes so many family-friendly Disney songs ever did work on Sausage Party! That’s right from a family friendly to decidedly family UNfriendly, Menken has done it all.

As a part of the concert, Menken shared with us that one of his upcoming projects is a partnership with the director, Guy Ritchie, on the live-action reboot of Aladdin. He’ll also be working with Lin Manuel Miranda for the live-action Little Mermaid remake, as well!

Last but not least was our interview with Michael Vargo, Vice President of the D23: The Official Disney Fan Club and the Walt Disney Archives. We got to hear him speak about the Expo and how vast it has become since its humble beginnings in 2009. The perks of being a member are excellent! You get free-with-purchase items, exclusive discounts, and even exclusive experiences only available to D23 Fan Club Members. Go HERE to get all the wonderful details such as types of memberships.

He shared with us that attendees come from all 50 state and 33 countries, with the crowds growing every year and with the first parade that ran through the D23 Expo floor. Lastly, he shared that planning for the next Expo would begin the day after the current Expo. Obviously, these titanic events take Titanic planning!

D23 Expo – More Pixie Dust than You Can Handle

The D23 Expo was an amazing experience. Between the panels, music, interviews, and tour of the archives, I saw more Disney in three days than I think I have in my entire life. It was spectacular. The D23 Expo is the perfect place for any Disneyphile, and I had one of the most amazing times of my life. I feel so honored to have been a part of it and to have been able to share it with all of you!

Make sure to keep up to date by reading my other recaps!