Mickey’s Not So Scary Halloween Party at Disney

Disclosure: This post is part of our media visit to Walt Disney World in exchange for coverage. Opinions are 100% mine.

One of my favorite times of the year is when summer ends and fall begins. And living in Florida, sometimes it’s hard to tell when that happens. So my family considers Mickey’s Not So Scary Halloween Party to be the kickoff event which indicates when that happens. Select 36 special nights from August through November 1st, the Magic Kingdom closes regular daily operations for a limited-guest Halloween party that leaves you wanting nothing.

Mickey’s Not So Scary Halloween Party features an entire Disney park decorated to the hilt for its Halloween gala. There are also character meet and greets, a huge fireworks display, special Halloween treats, and a lot more. Our contributor, Lisa and her son Nick got to experience this spectacular event. Before you get the full scoop, let’s look at a brief overview of what to expect at this unbelievable Halloween extravaganza. 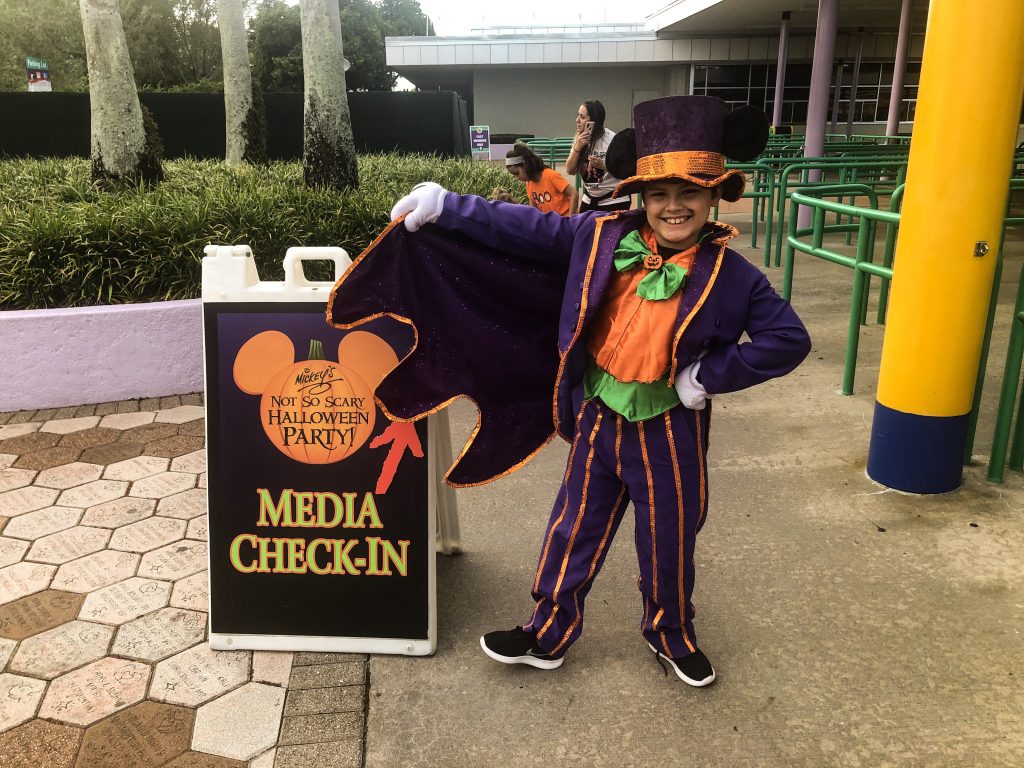 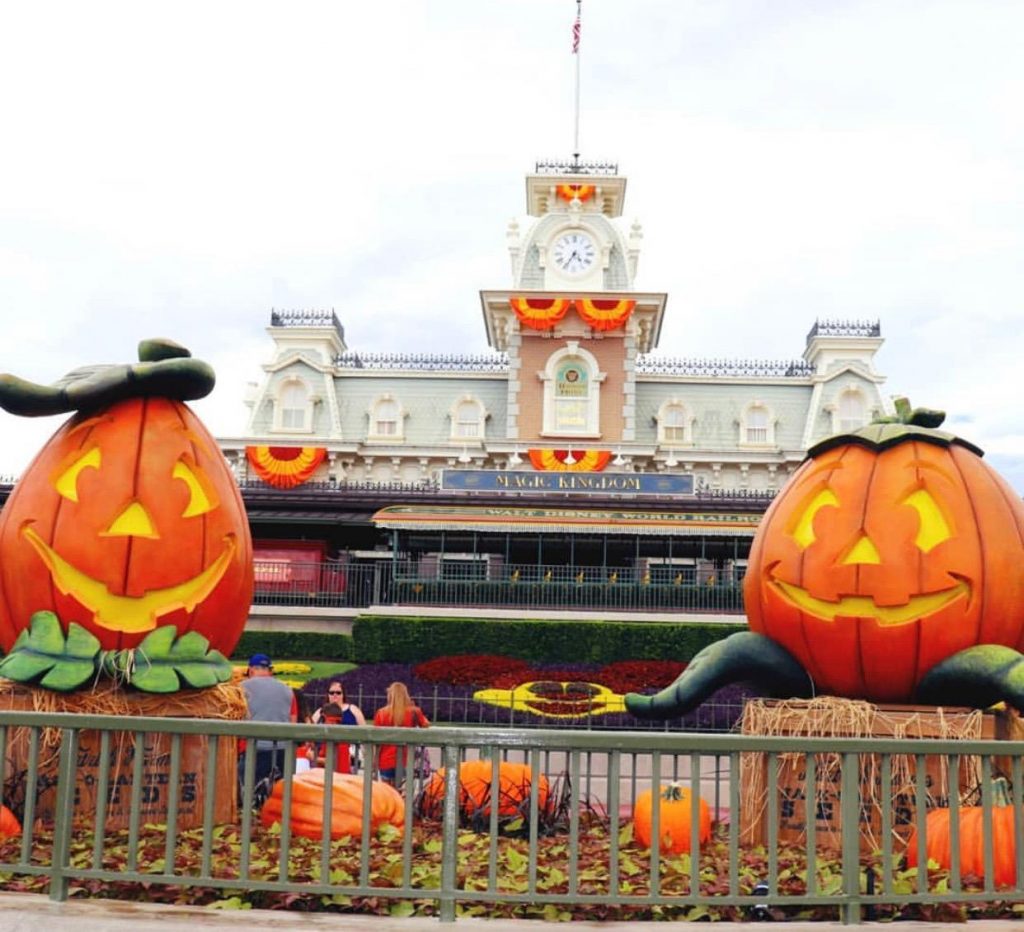 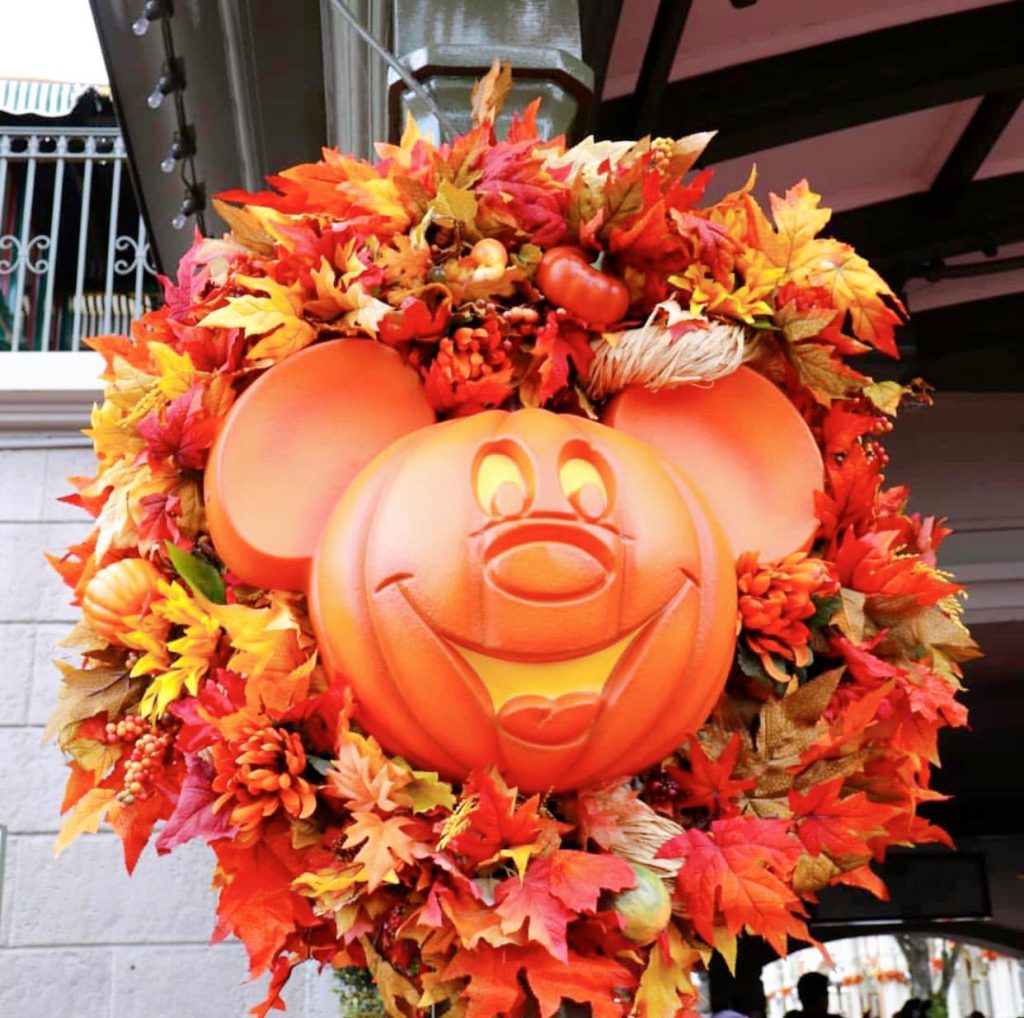 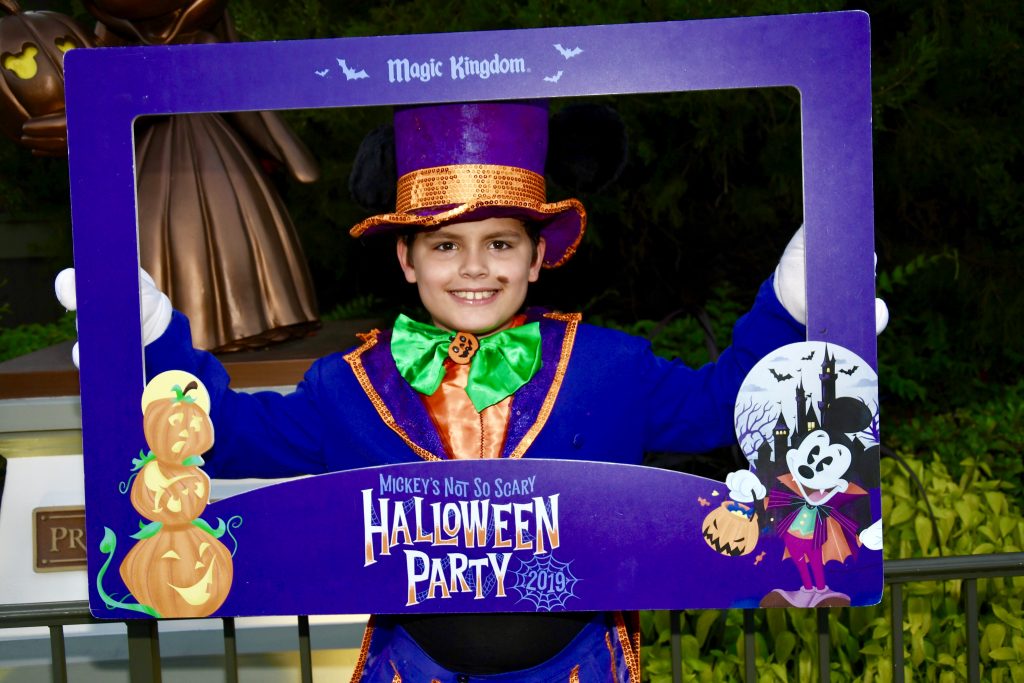 Our Mickey’s Not So Scary Halloween Party Experience 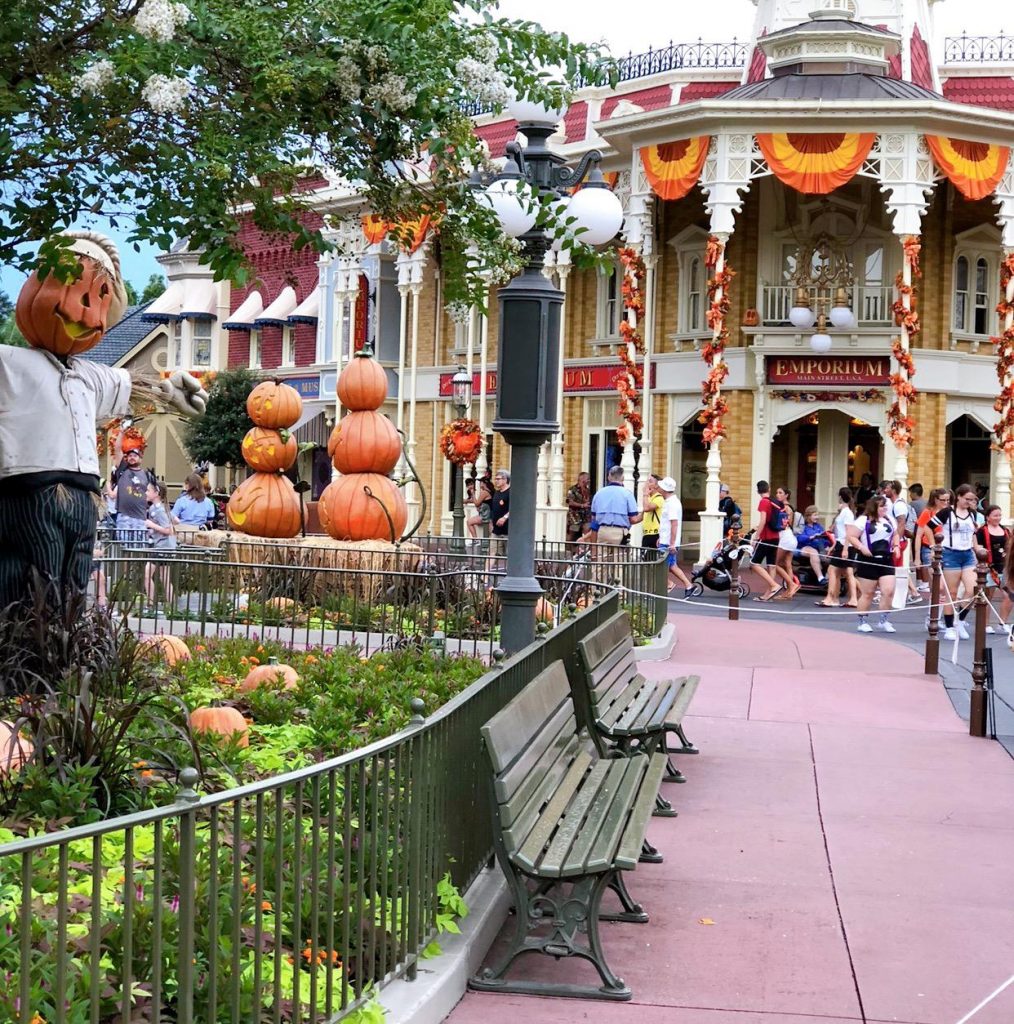 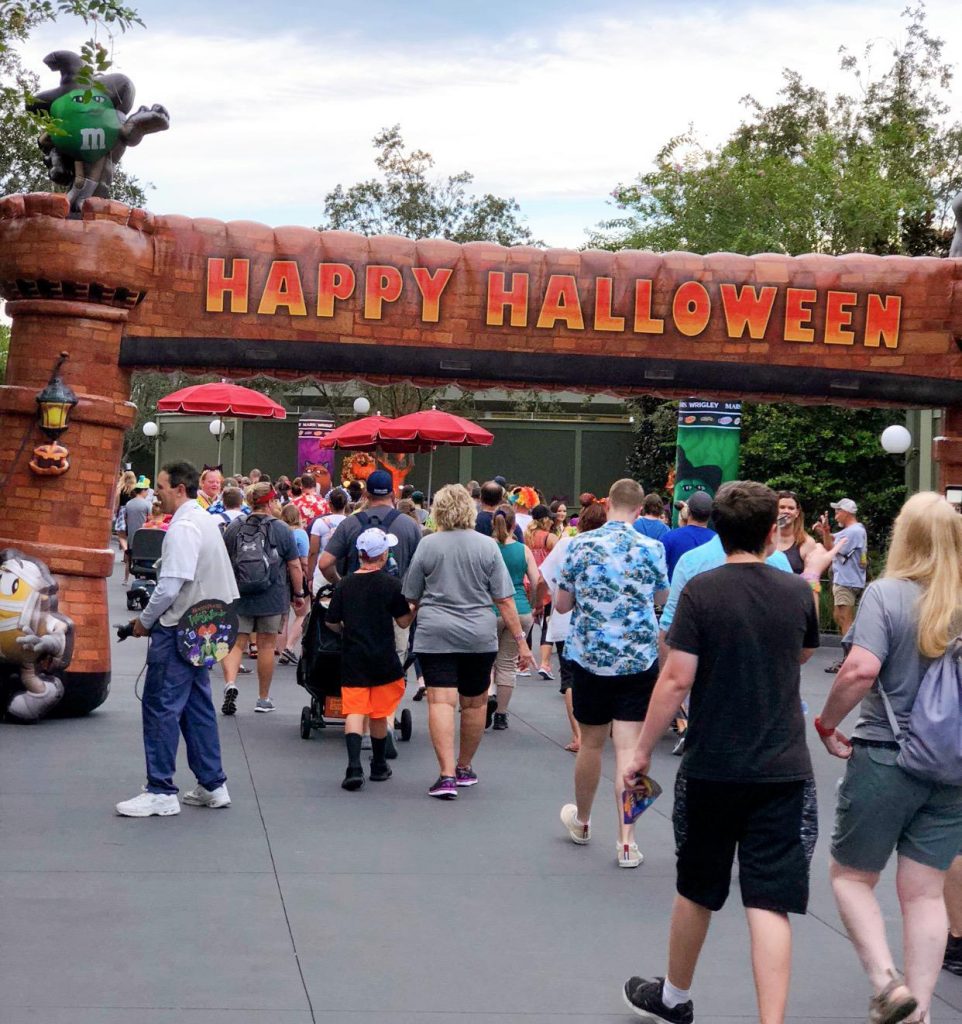 The night started with some trick or treating and photos, and then moved onto to the ‘Main Event’…the M&G with Mickey in his Halloween costume! Nick really loves to cosplay everything Disney, and he usually goes all the way. This time around he wore a replica of Mickey’s Halloween costume. He’s had one for a couple of years, but it no longer fits. So he begged to make another, looking like a carbon copy of Halloween Mickey; hands, ears and all. YES, the boy is happy! 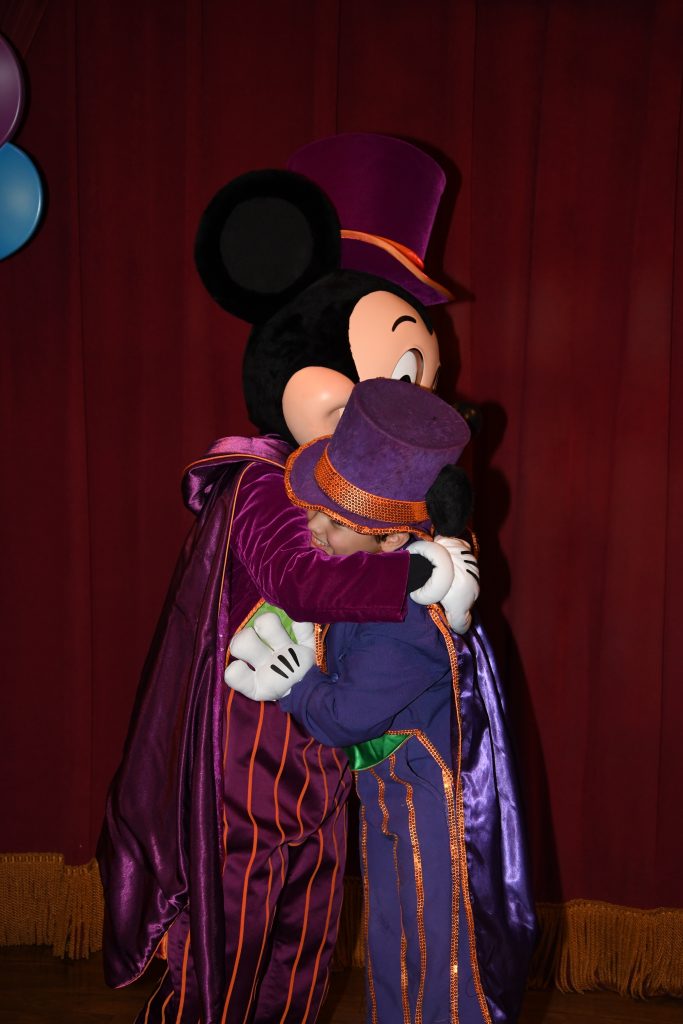 It was all he could talk about on the ride there. I anticipated a really long line, so we tried to get there as early as we could. To my surprise, the line this year wasn’t bad at all. Got into the park at 6:00ish…after a few photo ops and candy drops, we were waiting in Mickey’s line where we were meeting The Mouse Himself.

The character experiences are always incredibly fun, but Mickey is a notch above the rest. Mickey fawned over Nick’s costume, gave hugs, played around with him. What’s great about these characters is that they all do a fabulous job of non-verbally communicating with the guests. My mom also dressed like ‘regular’ Mickey. One of the character attendants called them the ‘Three Mouseketeers’. We ended the M&G with Mickey teaching The Boy his favorite vampire pose. We left smiling ear to ear. So no, Mickey is not just for little kids and adults. He still pulls in the ‘big’ kids, too. 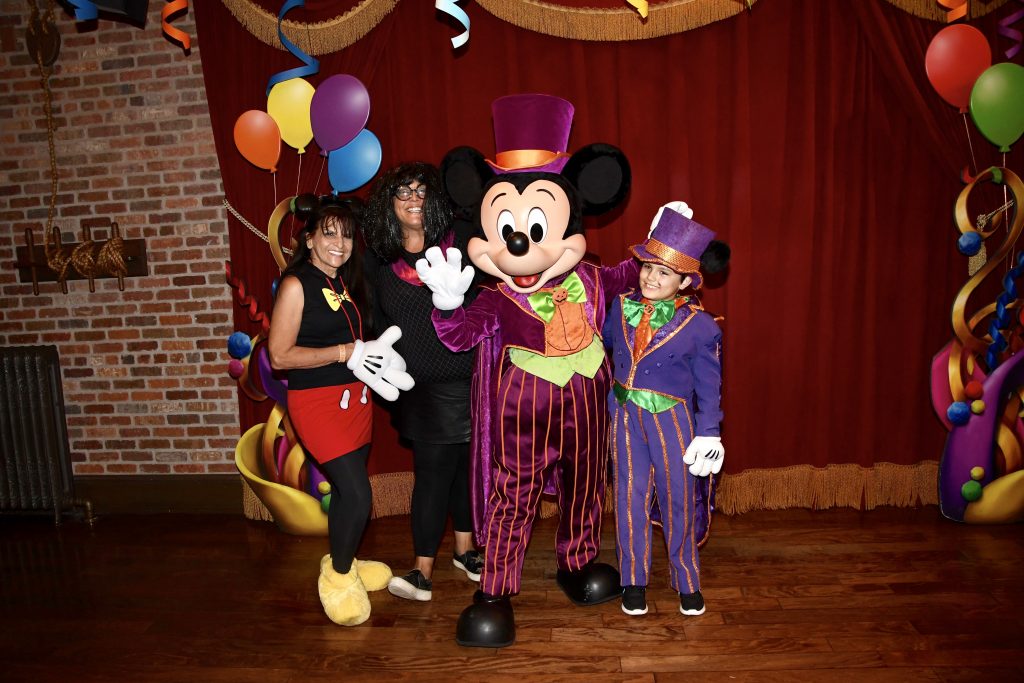 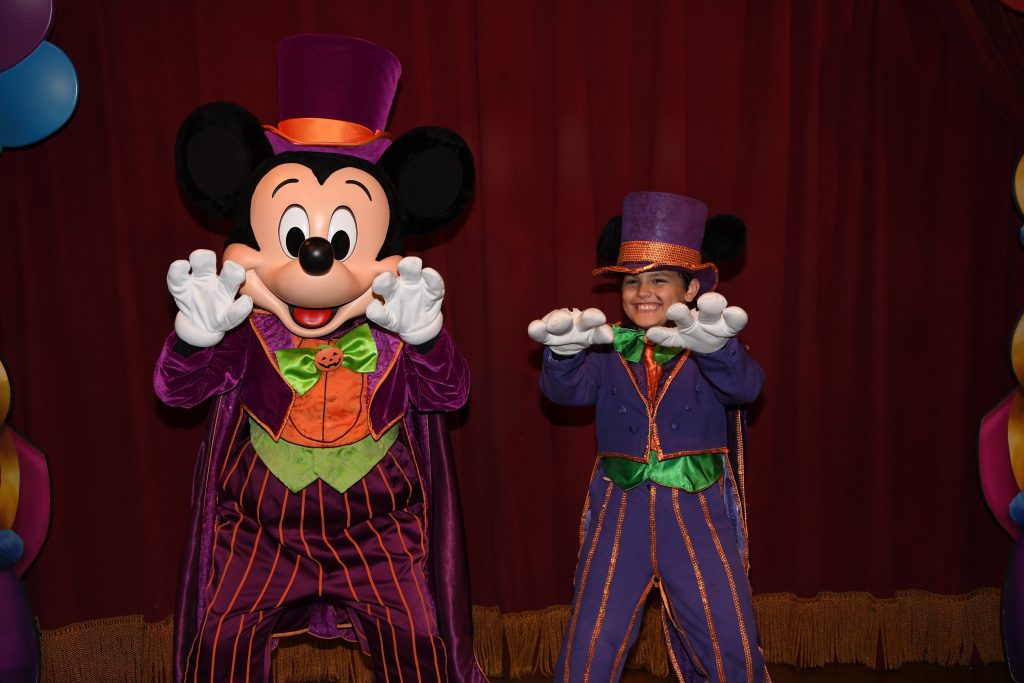 Getting the elusive Oogie Boogie popcorn bucket this year also wasn’t a problem. It’s been said in the past that they quickly sell out, but it seems The Mouse anticipated this and made adjustments? We got ours at the popcorn stand by the Castle hub. The one on the side walking into Tomorrowland. Throughout the night, I did see other stands with specialty buckets. I even spotted the Hitchhiking Ghost bucket in Frontierland.

We danced our way to Fantasyland where we shopped a little, rode some rides, watched the dance party, trick-or-treated in the multiple locations. We even people watched for a while! Another great aspect of Mickey’s Not-So-Scary Halloween Party is that adults and kids over 14 are allowed to come in costumes making the event a giant costume party with thousands of your friends! We saw so many incredible and creative costumes! We sat in Fantasyland just watching and oohing and ahhing over everyone’s awesomeness, and commenting to people on their creations as others did to us all night long. 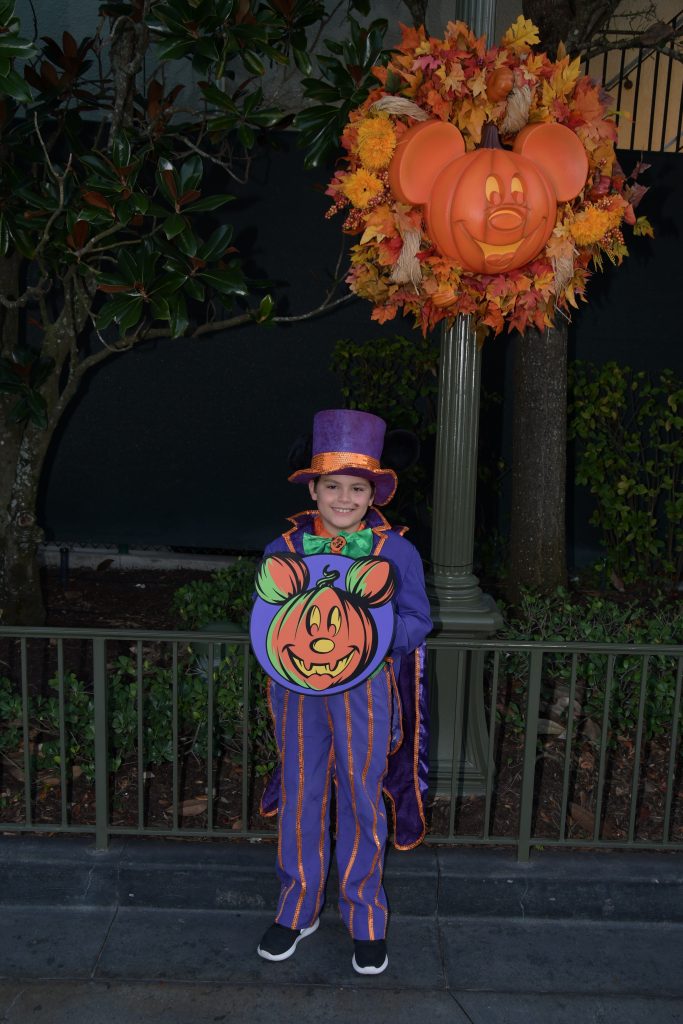 New this year is the Mickey’s Boo-To-You Halloween Parade with a new float, characters and more. Presented twice nightly during Mickey’s Not-So-Scary Halloween Party (Pro tip: catch the second run of the night for the best viewing options), the parade brings forth a cavalcade of fiendishly fun floats as each land of the Magic Kingdom comes together to celebrate Halloween.

It was outstanding! While we were there, we took that opportunity to go to the M&G for the 7 Dwarfs. They are usually over in Tomorrowland, in Pete’s Sideshow Circus. That M&G is always very popular, as you cannot do this M&G at any other time. So it’s a highly sought after one, and the lines can be looooong…I mean really long! Before the parade started, the wait was 1.5 hours. But if you can time your plans accordingly, you can take the opportunity to maximize your fun and minimize your wait! So when the 1st parade was about to start, we hopped over to 7D. Lo and behold, the wait decreased to about 30 mins. SCORE! And we didn’t have to lose watching the parade, because they have TWO per night! 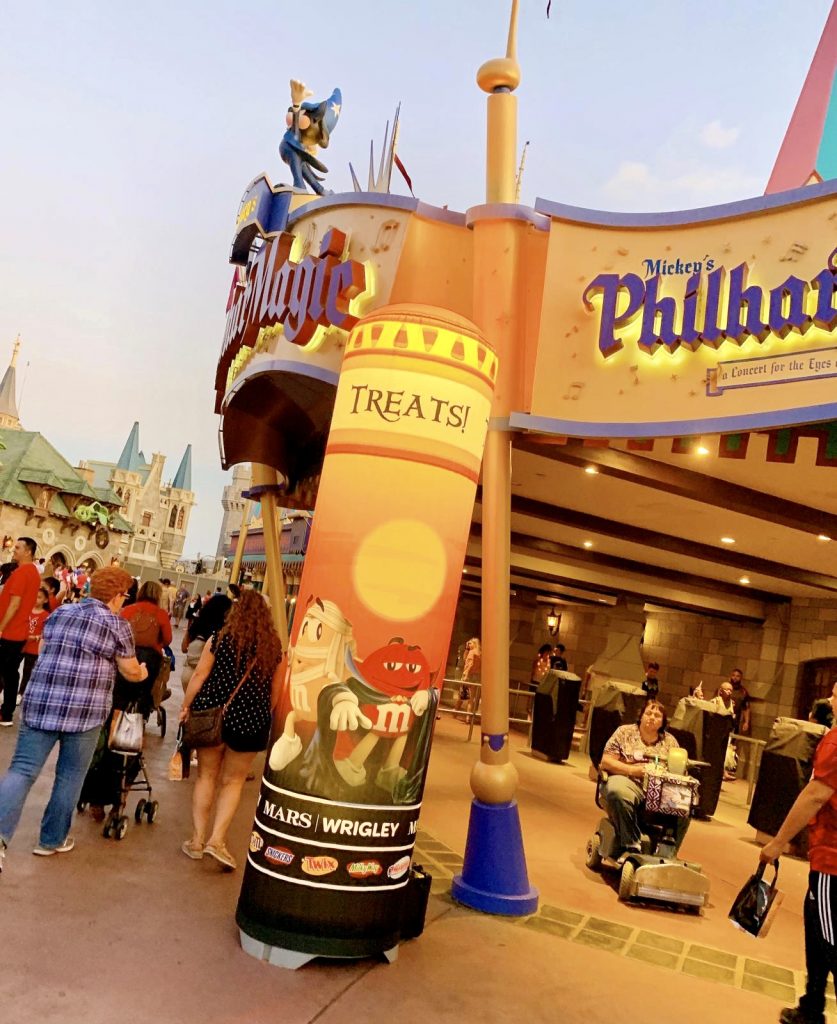 Nick  ‘quickly changed’ into a Grumpy costume, and was super excited. He practiced his best Grumpy pose. To be fair, he’s the worst ‘Grumpy’ because he couldn’t’ stop smiling all night long. It was funny because as we were meeting the Dwarfs, I said ‘you are the worst Grumpy ever!’ and Happy leaned over to me and was waiving and pointing and I said ‘yeah, he should have come as Happy!’ and Happy just started shaking his head and giving me a thumbs up like ‘yep! he’d be a much better Happy’. All of the 7D was great, and I can totally understand why the M&G is so popular. They were all fully present, giving the guests a full experience which is much more than just posing for a pic. 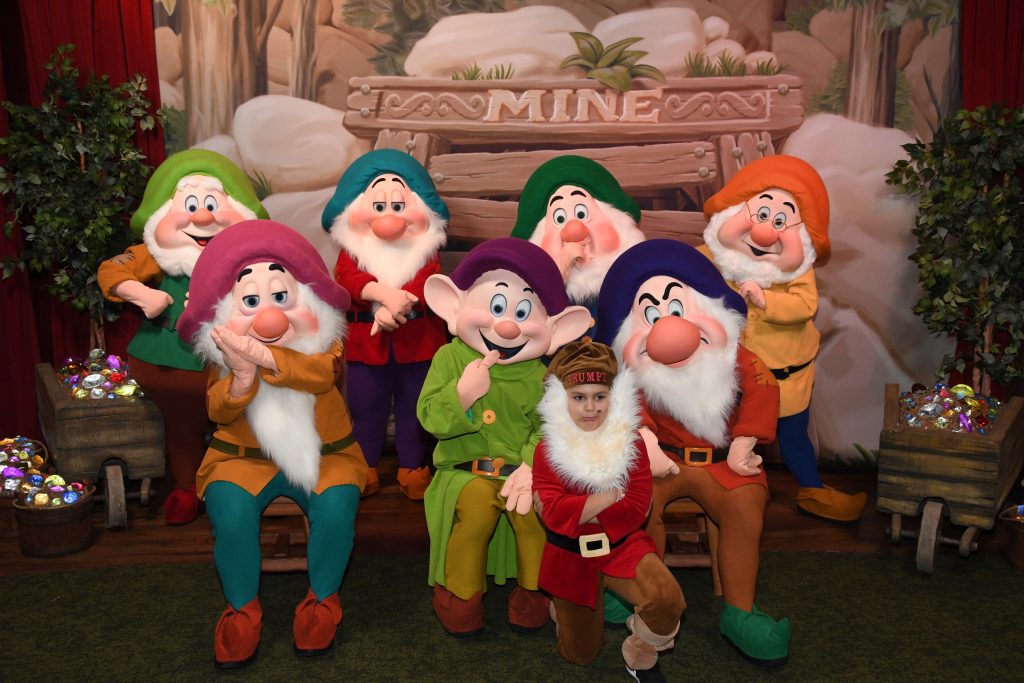 They took pics with Nick, and then I asked if my mom and I could jump in? Of course…go ahead! At first, I stood there, feeling a little awkward and not knowing what to do or how to stand among the whole group of them. But Dopey crooked his arm, and put his hand on mine and guided me to ‘link’ arms. By the end of the interaction, I was hugging all of them goodbye. I felt like it was a Sunday dinner with all of my relatives because we all were hugging all of them individually, and saying our goodbyes. It was so much fun! And not just fun for my kid, or me having fun because he was having fun. I was having fun myself, and standing there with the 7D and all the interactions instantly morphed me to my childhood and my early years in the Magic Kingdom, and my mom and dad reading me Disney books at night before bed. Seriously, I think Disney has some time machine stored somewhere. Because it was totally surreal for me.

A Fireworks Show to Remember

Anyway, *more* trick or treating later, it was time for the fireworks. As much as I love the castle projections, I love standing behind the castle for fireworks. Because it becomes like a full 360 experience. You’ve got the castle on one side, but the fireworks are all around you. You cannot see the show, but you can still hear all the music. Disney, once again, proves that they thought of everything because they made it an amazing experience wherever you choose to stand. And it’s a brand new show this year featuring Jack Skellington, who of course is a favorite of ours. The fireworks were incredible!!! MNSSHP fireworks have always been one of our favorites. And I want to say I felt like there were a lot more than previous years?

We shot over to Frontierland for *more* trick-or-treating, and to get a spot for the 11 pm Boo to You! Parade. They had roped off a bit of the street already, and Br’er Rabbit and Br’er Bear were out having a conga line and little pop-up street dance party! Guests were jumping up and going to dance with them. It was super fun. 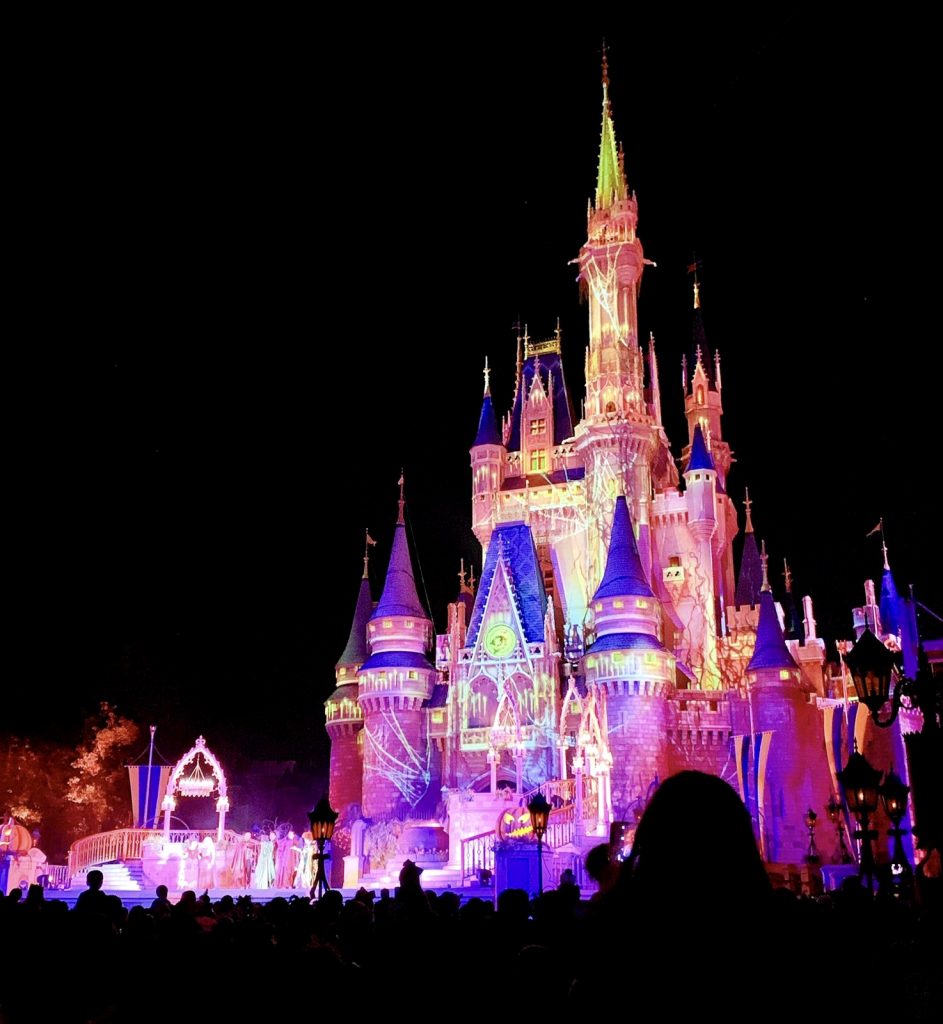 And then the parade started. I always love this parade. In fact, as I type this, I have the songs ‘Boo To You’ and “It’s Good To Be Bad’ stuck in my head. The characters are great – they all do such a great job of involving the crowd; pointing and waving and blowing kisses and such. Mickey and Captain Jack both waved at my kid, which made his night. But the entertainment CMs are super incredible. The dancing is just amazing. To watch these performers not only performing a dance – which relies on timing and teamwork with partners – but to do it all while walking in a parade is actually pretty incredible. They really are amazingly talented. I stood there watching and thinking about how talented these dancers were. (The funny thing was my mother mentioned the same thing to me out of the blue while we were driving home). So, if you’re an entertainment CM reading this: wow, you are awesome and we see you! 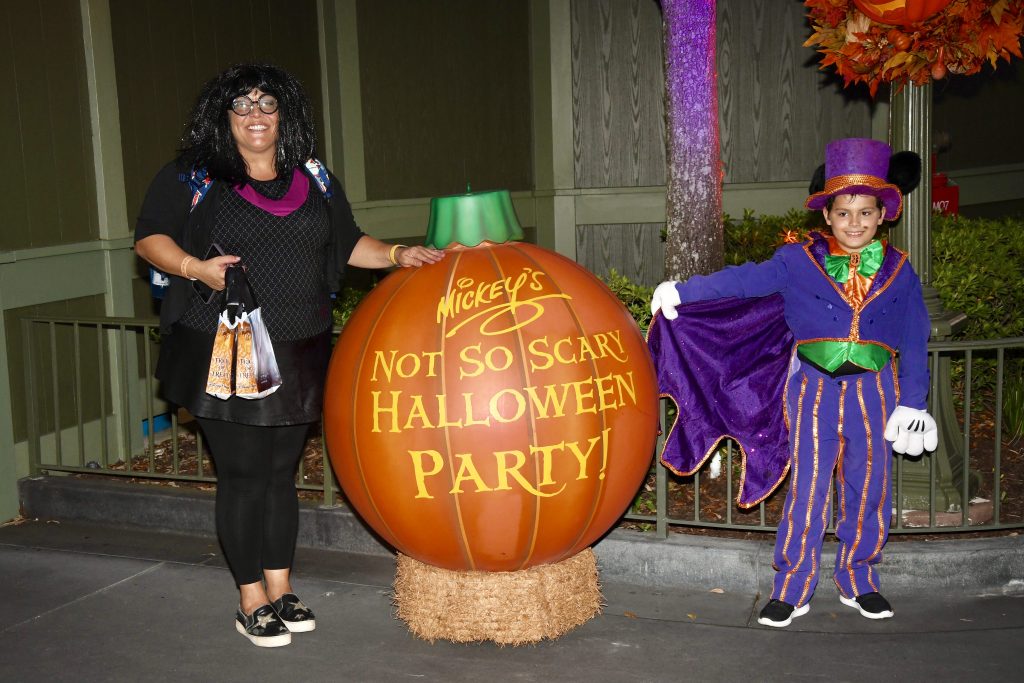 Trick or Treating All Night

*More* trick or treating and we find these incredible CMs who were so incredibly nice and super thoughtful. My son mentioned he liked 3 Musketeers, so they actually handpicked several out specifically for him! This is what makes Disney, Disney. They have a long task ahead with all these people to care for, and instead of just rushing through and ‘calling it in’ by mindlessly just handing out candy, they take time to make each guest feel like we matter. Even the simplest thing as an extra smile, or commenting on a kid’s costume, or fishing out a few specific candy bars goes such a long way when they didn’t have to. They could have just repeatedly said ‘Happy Halloween’ and thrown some candy in a bag to move people as quickly as possible. But instead, they still move quickly but take a second or two and they connect with my kid, who was blown over by the fact that he ‘scored’ some extra 3 Musketeers, and did you hear what they said about my costume? 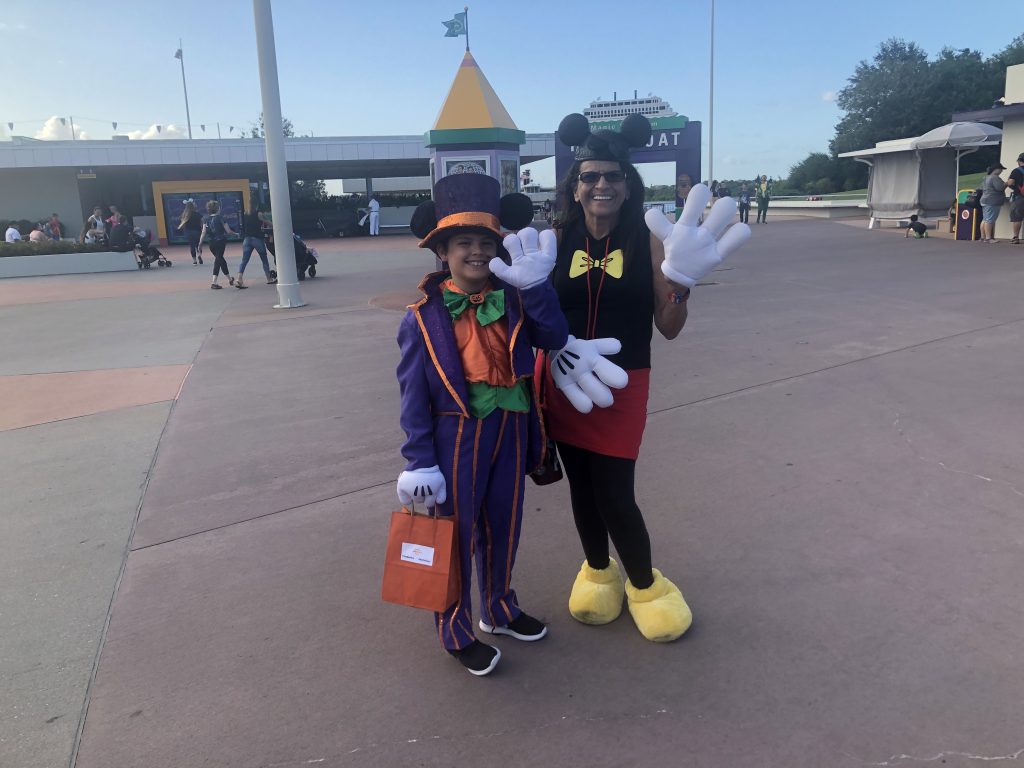 We headed over to Splash and Thunder Mountains, for some *more* trick or treating and rides. Would you believe the standby wait was only 5 minutes each? Yep, you read that right.  5 MINUTES EACH! These are wildly popular rides. Tier 1 Fastpass, and not easy to always get. And the wait at MNSSHP IS FIVE MINUTES WALK ON.

We closed out the night with the super nice trick or treating CMs I mentioned above, and much like Cinderella at midnight, it was all over. Or was it? Frontierland was becoming a ghost town, so we made our way back to The Hub. OOOH look at this….a show on the Castle stage! The Sanderson Sisters, Oogie Boogie, Dr. Facilier, and more! Leave it to Disney to have a show after the event is ‘over’! So we watched the show and sang and danced around a little more before we made our way to leave. We had been there over 6 hours and it felt like we had just scratched the surface. 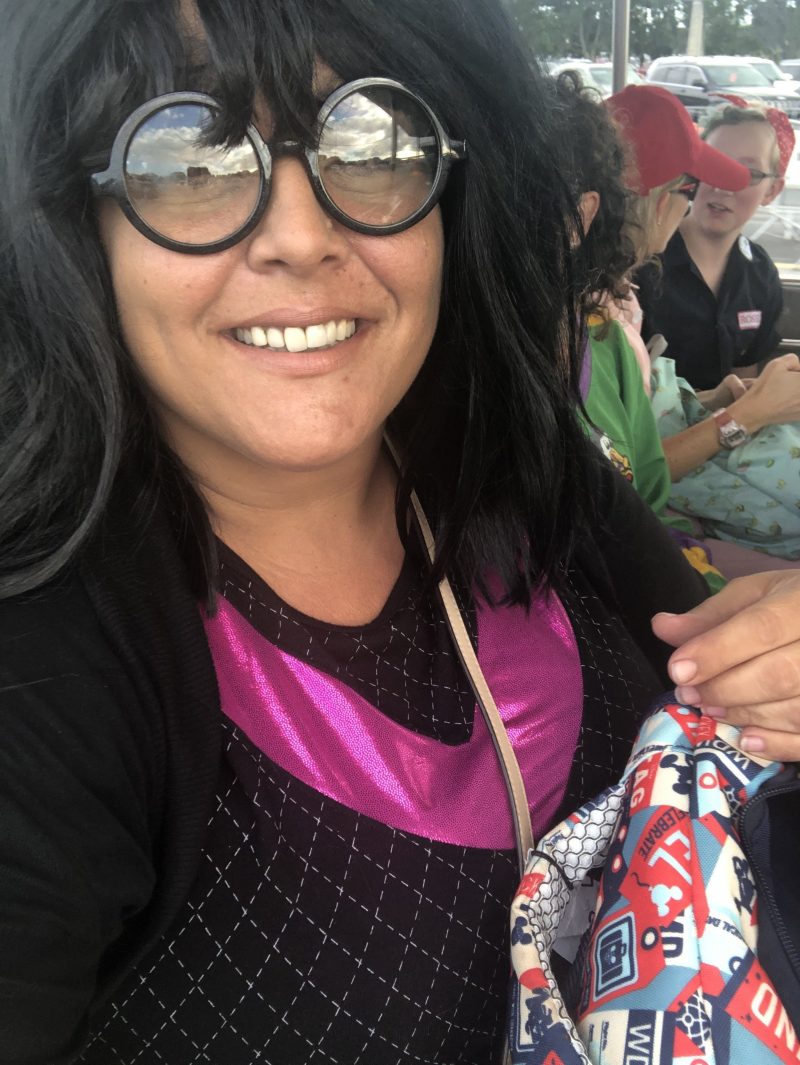 Get your tickets! When you buy early, you SAVE money! Event tickets start at $85 for select nights after $10 advance-purchase savings

Lisa is a stay at home mom who homeschools her super charming son, Nick.