As part of the Toy Story 4 Press junket, I was not only able to screen the film (check out my review!), I was also able to take part in an interview with the Toy Story 4 cast! As part of this two-part event, I was able to take part in an interview with the director, Josh Cooley, producers, Mark Nielsen and Jonas River, and several cast members. Tom Hanks (Woody), Tim Allen (Buzz), Annie Potts (Bo Peep), Tony Hale (Forky), Christina Hendricks (Gabby Gabby), and Keanu Reeves (Duke Caboom) were all present to answer questions about the film. Through this wonderful Toy Story 4 cast interview, we were able to get a better understanding of the characters and why we needed a fourth Toy Story. 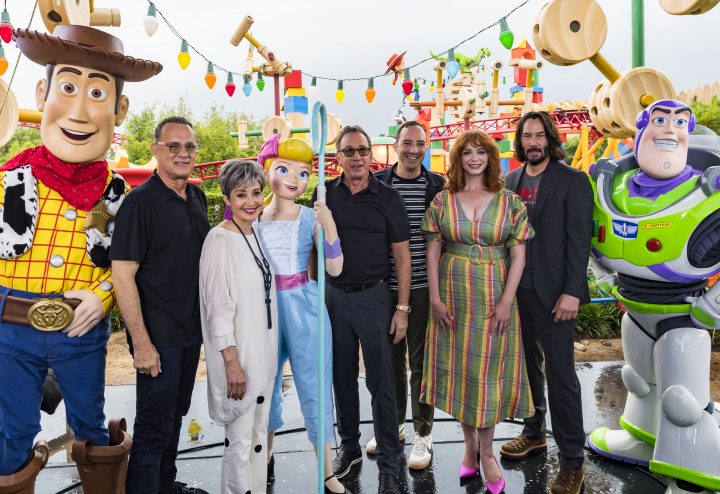 I really enjoyed this interview. We got a closer look at both the new and older toys and how they all contributed to the film as a whole. In addition, we were able to talk about how some characters have changed and get the cast member’s thoughts on their characters.

Toy Story 4 is full of new characters, and I love that. Each and every character has its own quirks and unique personality, and they all contribute to the story in a real way. 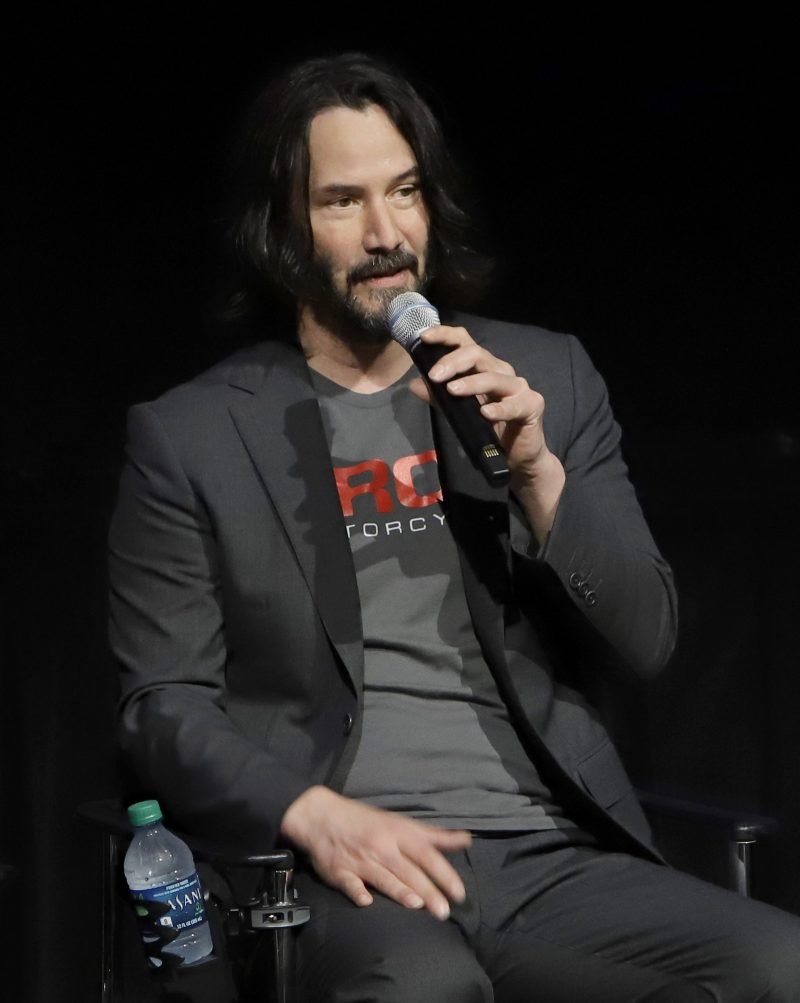 Keanu Reeves on Being a Cast Member

“It was a great honor to be invited,” he said. “For me, I was really excited. I knew I wasn’t going to be able to work with Tim and with Tom. But I knew that working with Pixar and being with these characters and these performers, that I was getting a chance to be a part of something that’s legendary.” 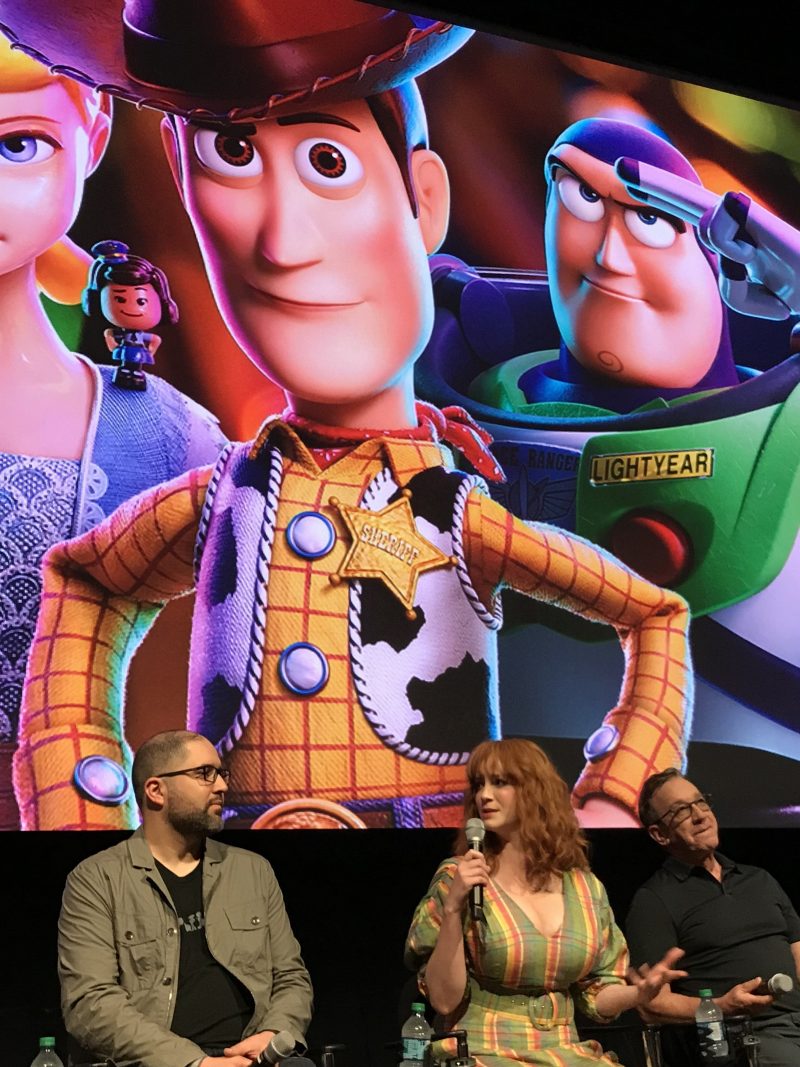 “I think when children see this movie, she comes across as sort of like the villain at first. And then you realize that she’s coming from a very loving place. And I think that’s important to sort of say maybe you don’t like someone at first, but how did they get there and why are they there and understanding their story. So I think she’s very special in that way.”

“I remember when they brought me up to Pixar, and they kind of described him as he’s kind of nervous. I was like, check. He asks a lot of questions. Check. And he’s kind of gullible to a fault now. It’s like bingo. I’m in!” 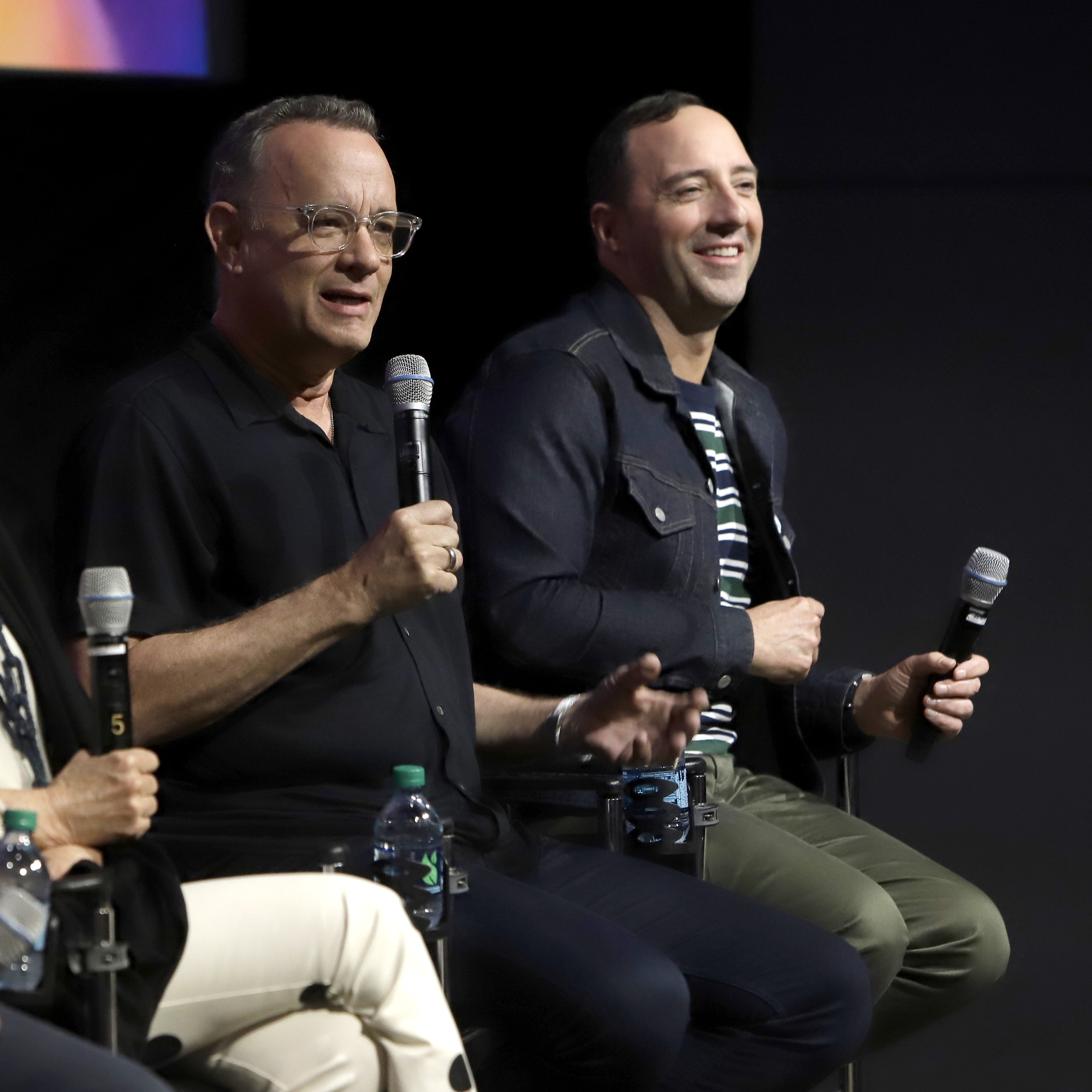 Tony also touched on the importance of Forky and his evolution throughout the film.

“So I just love that he sees everything as new,” he said. “And mainly, I love that he’s a character that his home place is trash. That’s all he knows is to help people eat soup. And then Woody comes along and shares that he has a greater purpose. I think just in life, anybody who might see themselves that way and they have worth. They have purpose. That’s just a beautiful message that Toy Story is giving us.”

Tony was also asked how it felt to know that Forky has become a favorite character even before the film’s release.

“I’m still kind of waking up to this,” he said. “So even you saying that. I’m like sorry. It’s hard to even digest. Because this has been such an iconic franchise that I never thought that I would be a part of something.”

“There was a simplicity to Forky that I just absolutely fell in love with,” he went on, “and the fact that he’s made from pipe cleaners and a spork and little popsicle sticks. And he brings Bonnie so much joy. He’s brought into the world. He doesn’t understand the rules of the universe. He’s very confused when people drop to the ground when humans walk in. He’s just kind of always wide-eyed. He’s very present. And I just loved the simplicity of it. It’s been a huge honor to voice him.” 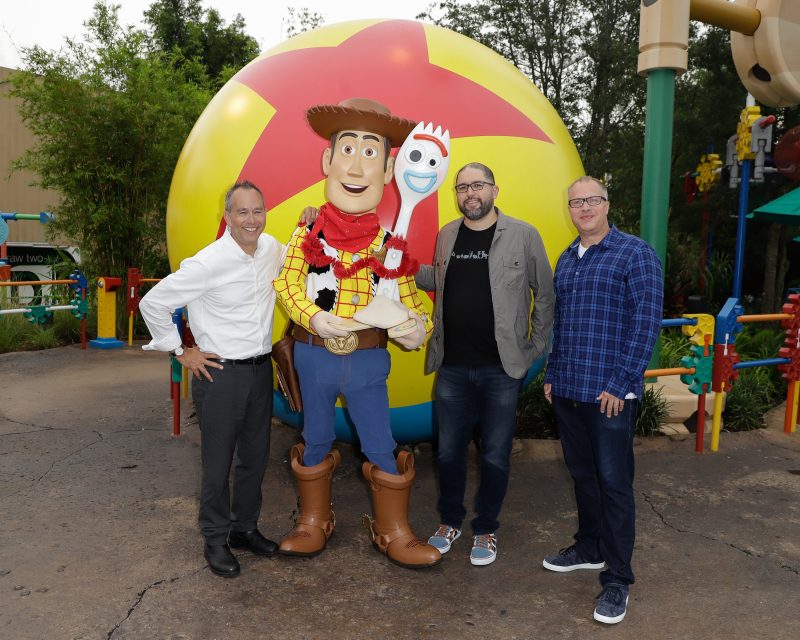 Jonas Rivera on the Importance of the New Characters

“The story would not work without Gabby Gabby. She is an echo of Woody, and we needed her to be this legit and real and truthful human character. The same thing for Duke Caboom and Giggle and everybody new. So they’re not just for fun, although we love them. But this movie wouldn’t work without them.”

On the Returning Characters

While the new characters are a ton of fun, let’s not forget the returning characters. These are the toys that have gone on so many adventures together, and it was wonderful to see the cast talk about their experiences.

When asked about the evolution of Buzz Lightyear throughout the films, Tim said, “It’s funny to watch this whole transition. At one point, Woody is mean and yells, ‘You are a toy,’ and I had to transition because he’s always been wonderfully ignorant about who he was – that he was a toy. And you’ll see in this movie….Woody has this inner voice. I think it’s the sweetest part of this movie.”

Tim went on to talk about his thoughts on Toy Story 4 itself, saying, “I love the computer generated part of this. It gets better and better and better. Just the look of it was stunning, and then as I’ve said many times, I read through it. And the end kind of was mercurial. Number four was like a daughter getting married, perhaps. There’s great sadness because she’s leaving, but great sadness because she’s also gaining something. And that’s what this is about.”

Jonas added that they used his reaction to the film as a barometer on what they were doing. “Tim, I haven’t told you this, but we actually used your reaction a little bit as inspiration. When we met and recorded and walked you through that ending, your reaction was like our first. Because we realized we were throwing the ball pretty far with going to that ending. We were kind of going, ‘Can we do this?’ When you read it and we were talking to you and we saw you….We could tell it hit you.”

“It’s good to know my pain is a profit maker,” Tim quipped. “I know that you profit off other people’s misery. That’s a pleasant thought.” 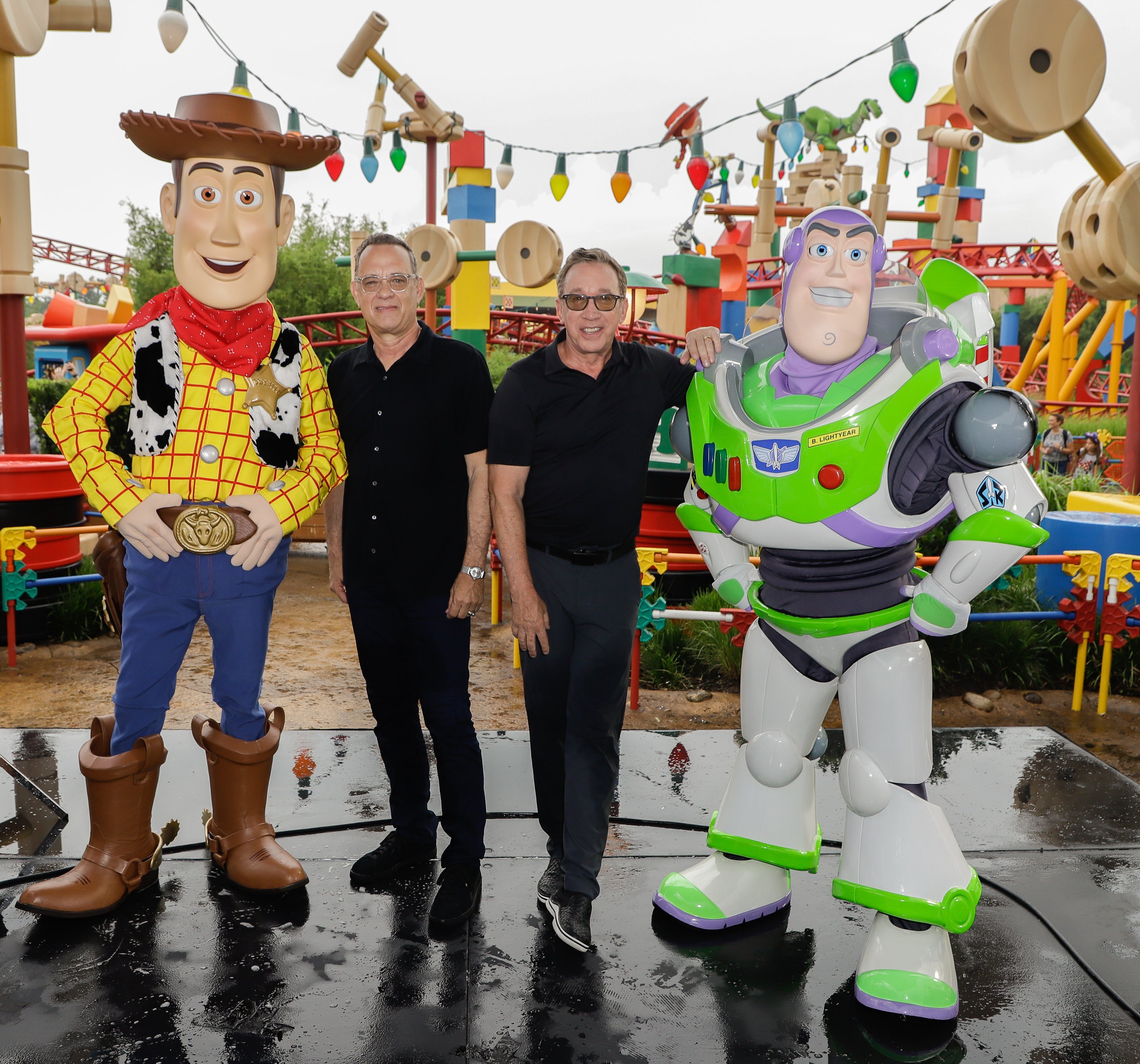 Tom Hanks on What Woody Means to Him

“Woody has been the great gift that I’ve seen play out again and again in my own family as well as sort of around the world. What I have truly appreciated is that no matter how old you are now, when you see one of the movies, you’re the same age you were when you saw the first one. And there is not a bump, there’s not a jolt. There’s no nostalgia. Nothing ages poorly. It’s exactly as it was and sort of always will be. There is a cohesiveness and an eternal quality to not just the stories and the characters, but the emotional bonds that we all have with each one of them.”

Don Rickles, the voice of Mr. Potato Head has passed, as we all know, which left us wondering how they were able to keep the character in the film. While casting a similar voice might have been easier, they wanted to keep the real Mr. Potato Head, Don Rickels, and his memory in the film. They did it by actually sampling his voice from past projects!

“We were honored to really be able to kind of keep his memory in the film and our editorial department did a great job really creating his performance out of his own voice from past projects.”

The Lesson of the Film and Toy Story Land

Like every Pixar movie, Toy Story 4 is about more than entertainment. It’s about teaching lessons while it tells a story. That’s always been my favorite part of what this studio does.

Josh Cooley on the Message Behind Toy Story 4

When asked about the message behind Toy Story 4, Josh Cooley said it was changed.

“Every character in this movie has gone through a transition or is struggling with going through one or has not gone through one. Bo Peep has gone through a transition we learn about while working on the movie. Woody is struggling with moving from Andy’s room to Bonnie’s room. Forky doesn’t even want to transition at all. And Gabby Gabby is kind of stuck in time. That’s part of the reason we put her in an antique store. Things are not changing around her. There’s dust everywhere. And even Duke is haunted by his past as well.” 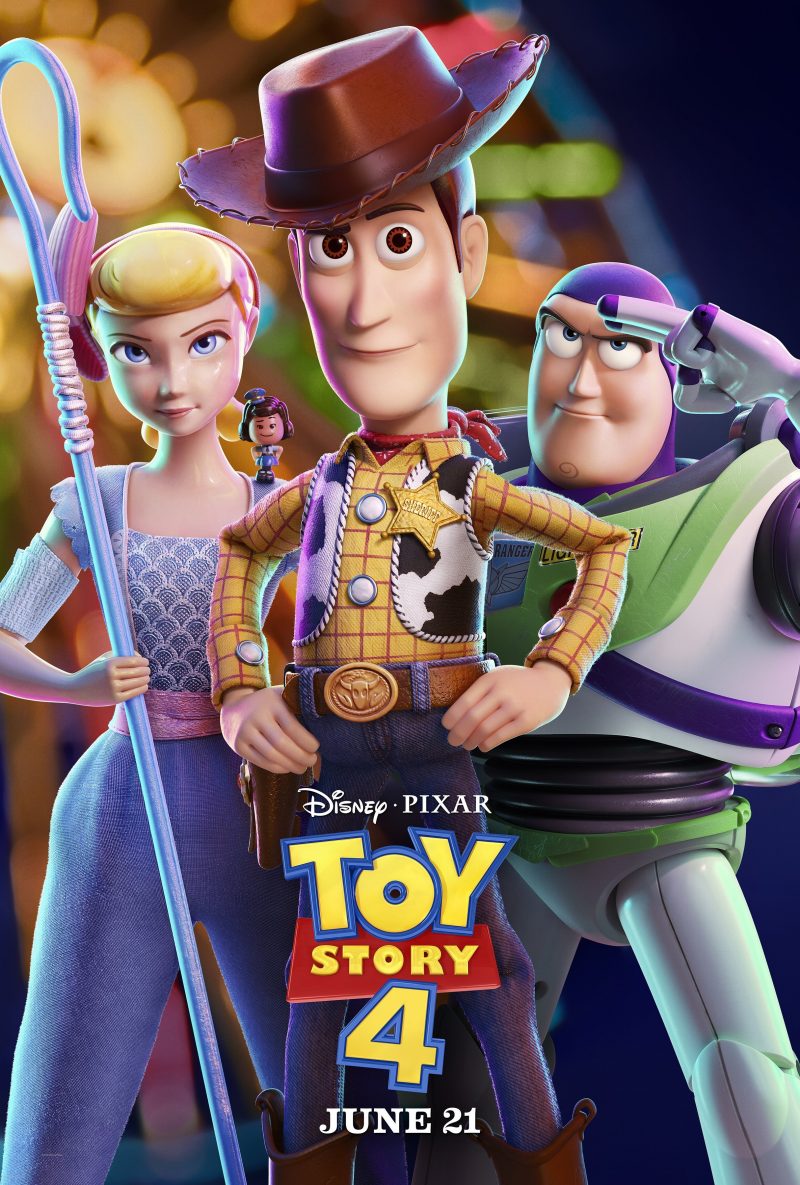 Tony Hale on the Easter Eggs in the Antique Store

Speaking of Gabby Gabby in the antique store, there are a ton of Easter Eggs in there! When asked about it, Tony Hale said, ““The amount of artistry and creatives and tremendous labor that has gone into this movie outside of us. The attention needs to be shining on that. Because they really have worked so hard. The movie is eye candy. It’s just such a visual masterpiece. It really is.”

“There has been this interesting thing about Toy Story. It exists sort of by audience demand by way of audience need. If the second movie hadn’t worked out or it had petered out somehow, I think we would have lost the confidence of everybody who has watched it. So all of these movies exist because they were willed into existence by the audience who was willing to invest (in) it and return right where they were and by the people at Pixar who did not take their responsibilities lightly when it comes down to Toy Story. They have to be able to reach a level of gravitas or import or connection. And that land over there is the example of it as well.”

Tony Hale added that Tom brought a certain warmth to the series through Woody that has become iconic, saying, “It also makes so much sense to me that Woody is in front at the park. Because your voice is so welcoming. He’s the father that is guiding you through life. There’s such a warmth that Tom has created”

One Last Gem from the Toy Story 4 Cast Interview

Forky is a beloved character already, and it shows. So much so, that mark Nielsen announced that Forky would be getting his own show on Disney Plus when it goes live in November.

“I’m producing some short films for Disney Plus which star Forky, our very own Tony Hale,” he said. “It’s a series called Forky Asks a Question. There are ten episodes that will be on Disney + when it comes live in November.”

I thoroughly enjoyed being part of the Toy Story 4 cast interview as part of the press junket. Watching and hearing the cast talk about their experiences and thoughts about the movie was wonderful, and I was able to get a real sense of the people behind the characters. I also loved hearing Josh Cooley’s, Mark Nielsen’s, and Jonas Rivera’s thoughts on the characters and the film, as well. Between this Toy Story 4 cast interview and my advance screening of the film, I can say without question that you do not want to miss this amazing film. Be there!