Disclosure: This post is part of my all-expense-paid trip to San Francisco, CA sponsored by Disney, in exchange for my press coverage. All opinions are 100% my own.

Visiting the Disney Pixar Animation Studios Emeryville, California during my recent Disney press trip, not only was it a bucket list accomplishment, but it also made me realize what a great job I have and what a lucky person I am.

Just imagine mingling with THE TALENTED animation artists that created “A Bugs Life”, “Toy Story”, and those WHO DREAMED UP Mike Wazowski, Nemo, Dory and so many more! 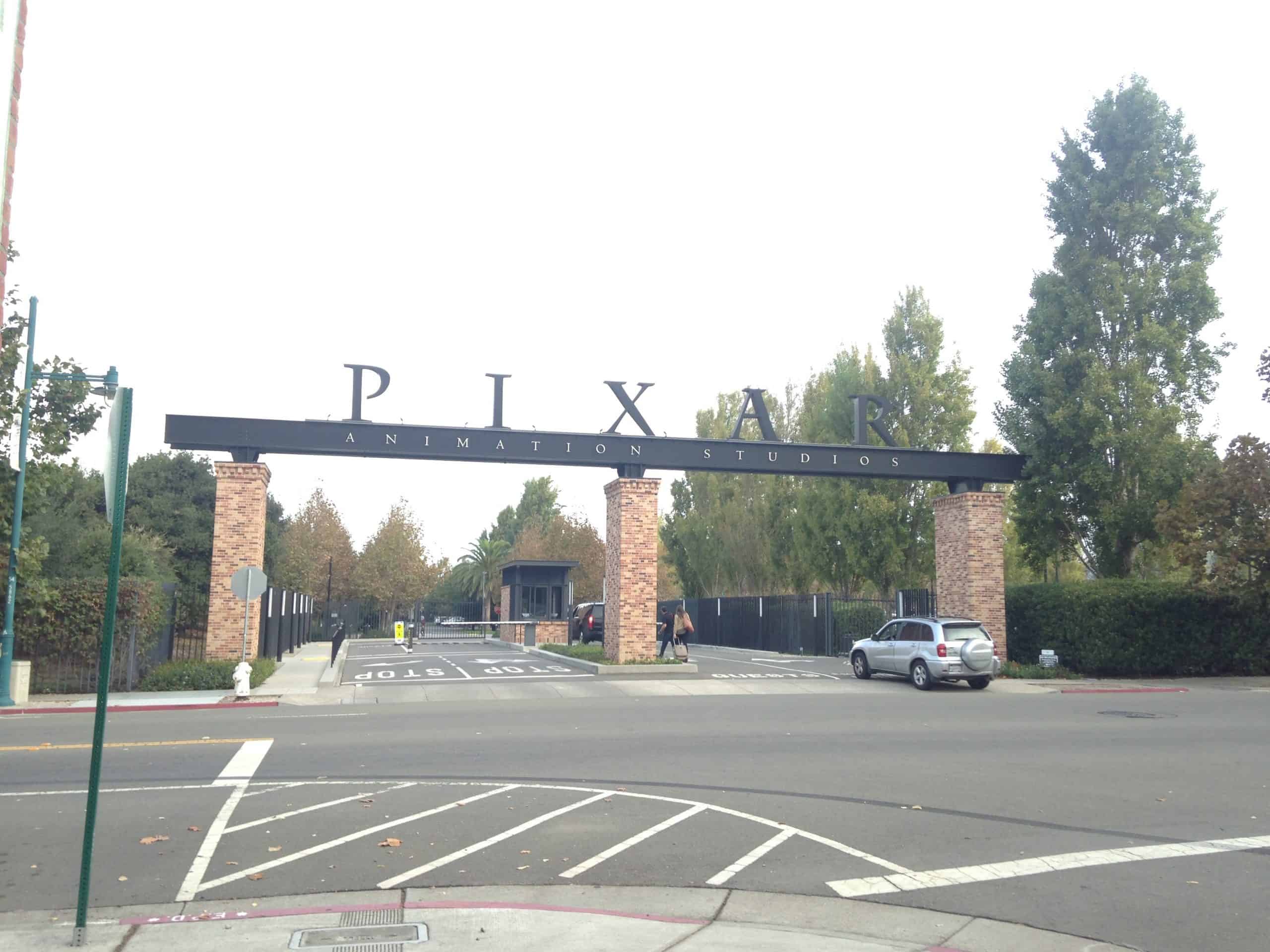 The security is tight and if you’re an immigrant like me, just think of it as when you enter a US airport! I must admit, before visiting Pixar, I had no clue of its history.

It was interesting to learn that with Pixar, Steve Jobs changed the film industry forever. The building used to be a candy factory and it was acquired from the profits made from the “A Bugs Life” film!

Steve Jobs designed and built Pixar into a powerhouse and then sold it to Disney, this is why the building was named after him in 2011.

As we walked down the shaded leafy campus it leads us to the famous HUGE angle-poise lamp and the yellow ball. People, THAT lamp, and ball are BIG! 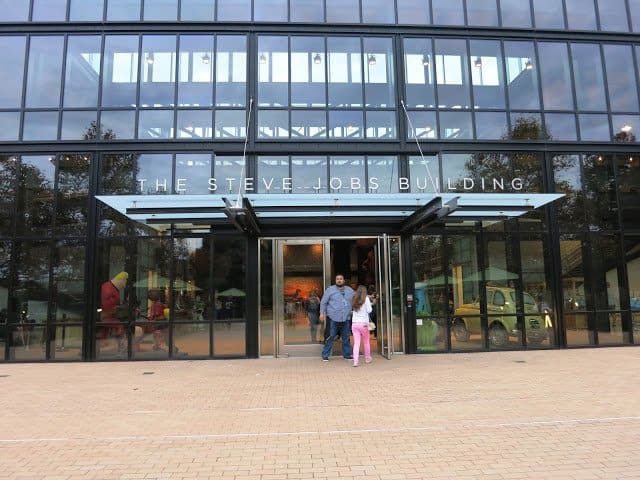 Across from that, we find the shiny doors to the Steve Jobs building. I ran into an employee at one of the restrooms, and after conversing with her about the buildings and campus, she mentioned that the campus is New York-themed.

Some parts are named after New York areas such as the West Village and Brooklyn! It features a swimming pool, football pitch, sand volleyball court, and playing fields.

The campus grounds were amazing. As we walked across it, I was taken by the beauty of the place. Palm trees were everywhere. Ducks pecked and poked at the grass. 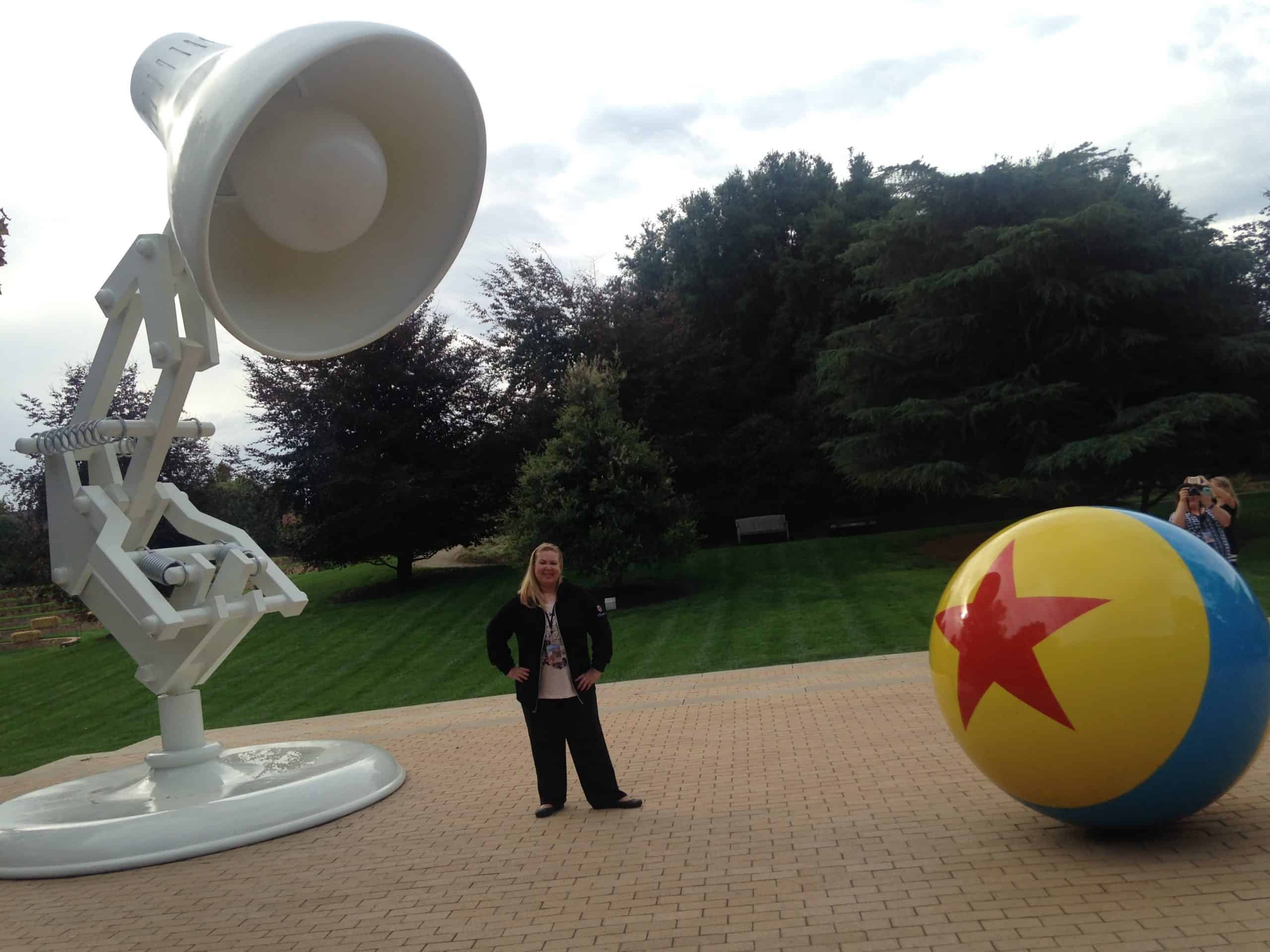 It was an idyllic setting that I wouldn’t think of when I think corporation. Seriously, when was the last time you worked for a company with a soccer field or a pool or a glass case lined with awards including several Oscars?

What a top of the line place! The cleanliness, decor, environment, are just magnificent. 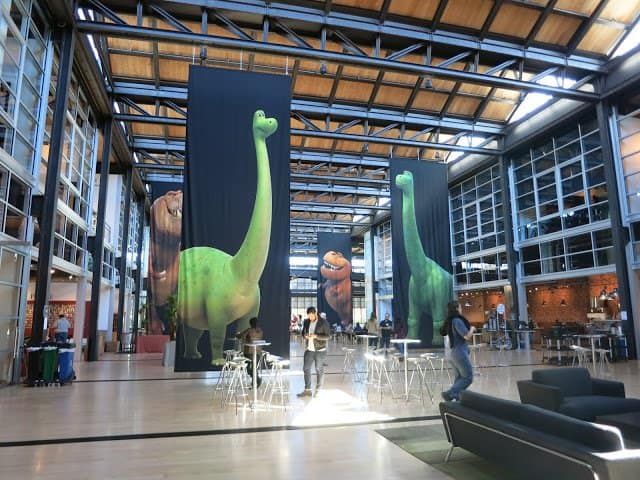 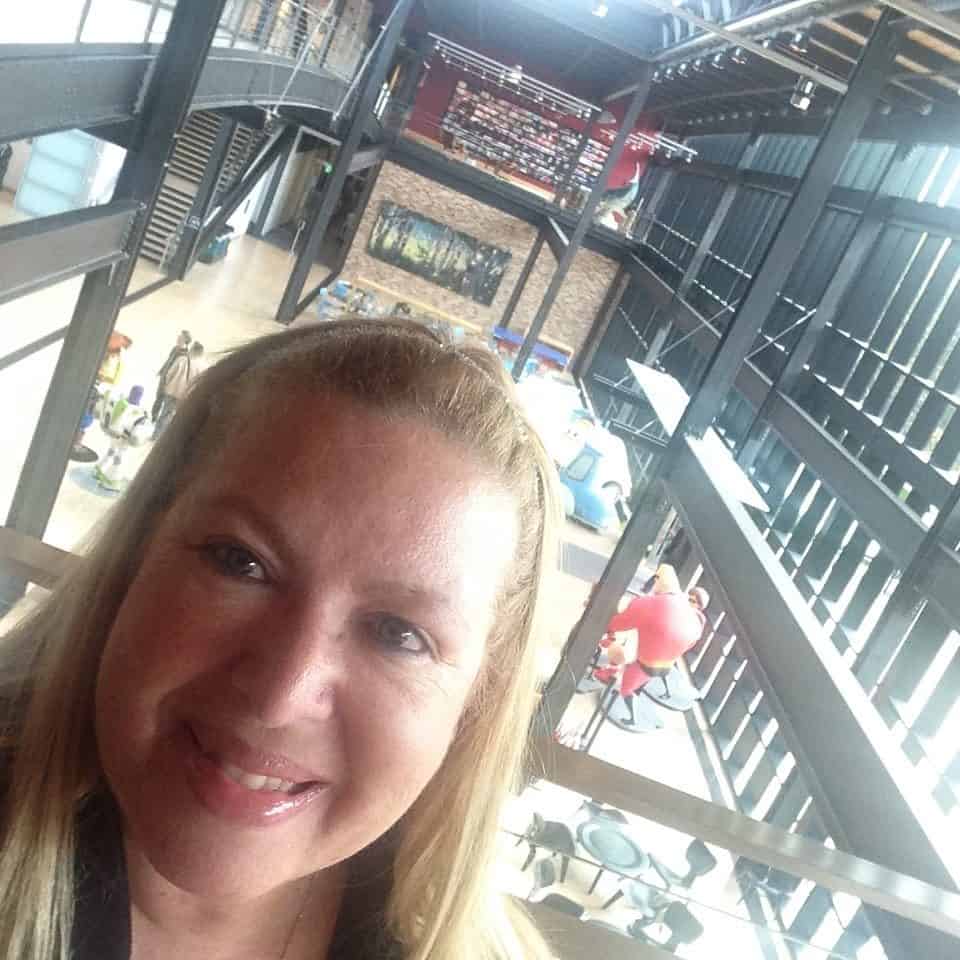 Pixar is built on rollers!

We toured the building and there is so much to see and learn! The building is built on rollers in case of an earthquake, making the building move more than three feet in any direction!

How do you like that? Aside from all the impressive amenities, PIXAR has some other great things going on as well. As a huge cereal lover, I have to say that the snack room is amazing. It’s not a tiny hole in the wall.

It’s big! And they have all kinds of goodies for the employees, including what had to be at least a dozen kinds of cereal. Disney really knows how to pamper their employees. 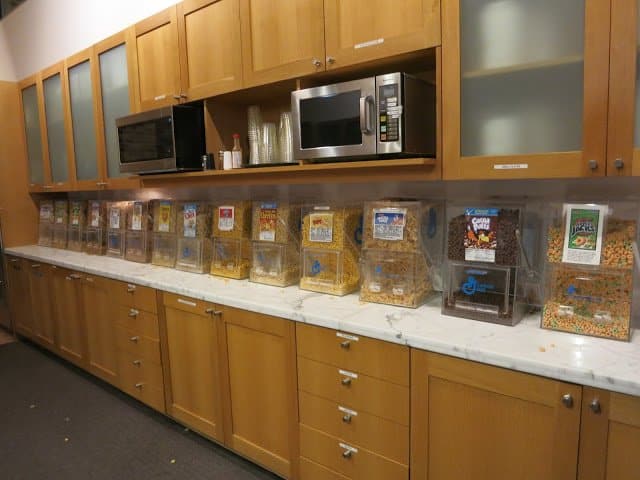 Pixar’s interior spaces are filled with PIXAR characters from their movies as well as huge cloth posters easily measuring 20 feet hanging from the ceiling. Just walking through the building fills me with all the magic and awe that I get from watching PIXAR movies.

While we weren’t allowed to pictures, the method of creating these popular films (mostly digital) like The Great Dinosaur, was impressive to say the least, especially when you learn that it was shot with a frame 1/24 of a second.

This is the reason why many of these popular films take 4-5 years to release!

My visit to the Pixar Archives was an unforgettable experience on its own. Just imagine, ME visiting a place that had never allowed people until just recently in celebration of, TOY STORY for the film’s 20th anniversary! It’s not located on the Pixar campus, but a few blocks away, and security….at its best! We saw models of Toy Story. 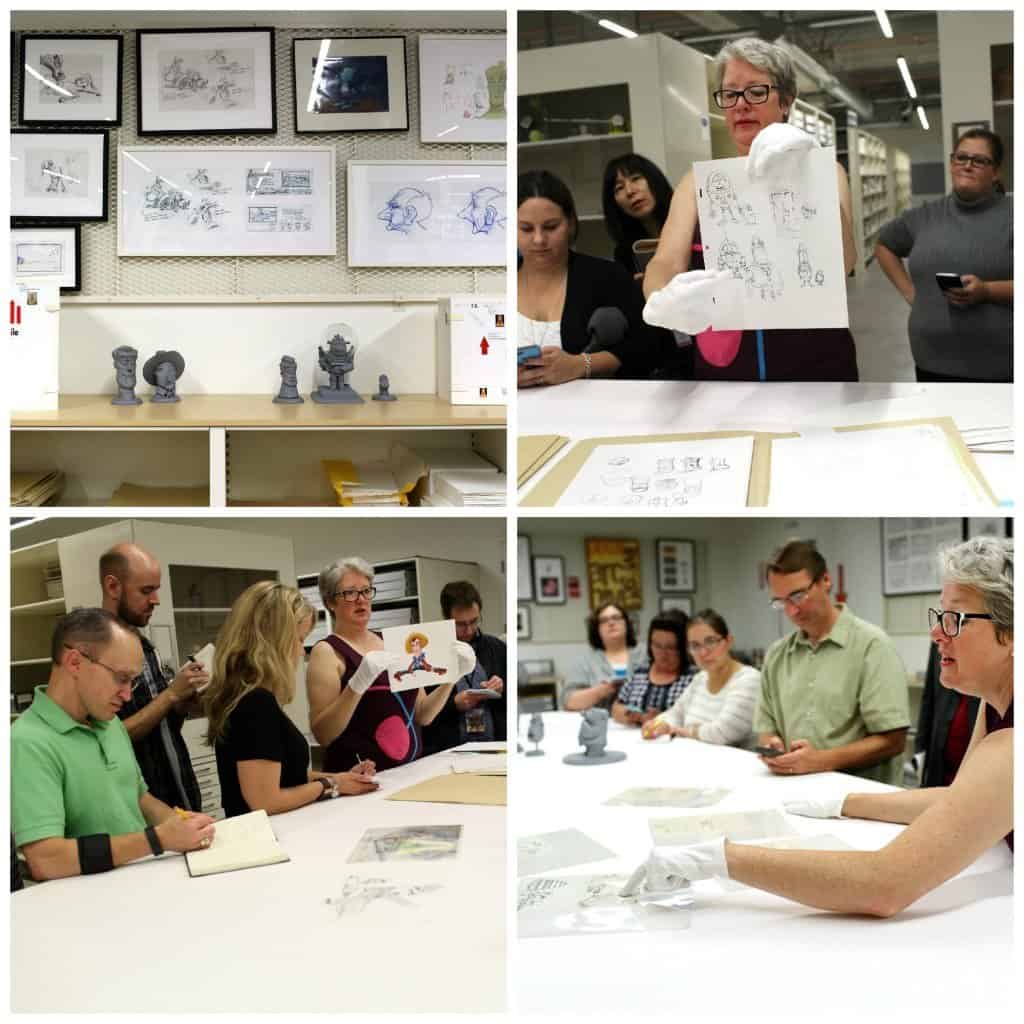 
Spending time at Pixar will always be a fresh memory, thank you, Disney, for making these experiences Magical indeed! You continue to rock my world around.