Walt Disney World Resort unveils the stunning Disney Skyliner gondolas! Several of these gondolas will have graphics based on Disney films, attractions, and characters.

When the Disney Skyliner Gondolas were first announced in 2017 at the D23 Expo, I jumped off my seat! It brought back so many great memories! The “Skyway,” as it was called back then, was a gondola lift attraction at Disneyland, at the Magic Kingdom, and at Tokyo Disneyland. They transported people back and forth between Fantasyland and Tomorrowland. 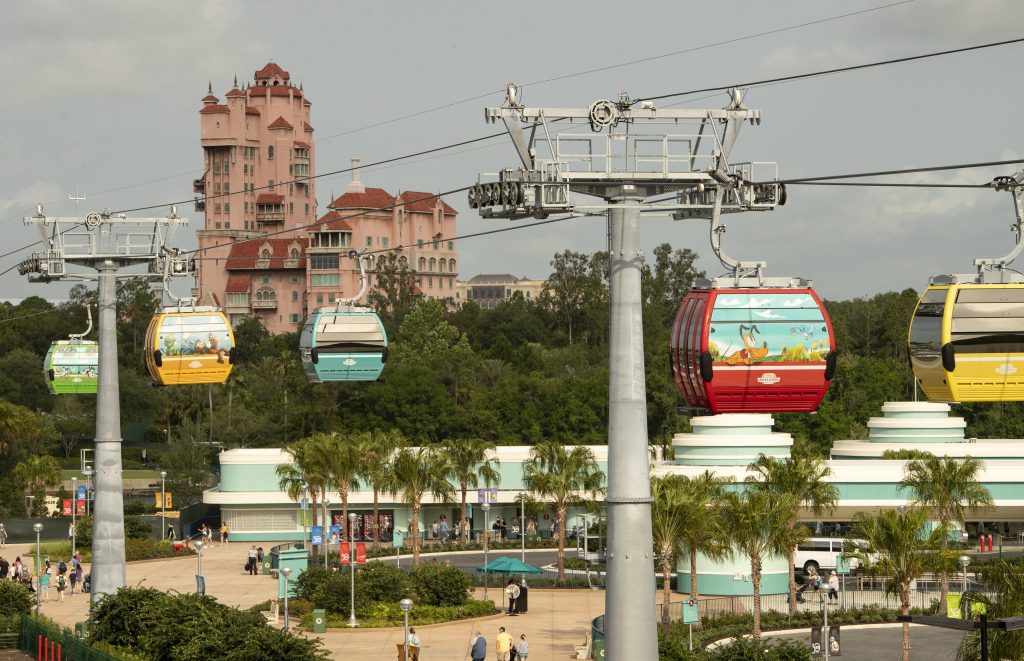 We all know that Disney does a great job of keeping up with new and exciting projects. In 1999, at the Magic Kingdom, the Skyway was removed. During the renovation of Space Mountain in 2009, the Tomorrowland station was demolished. and the Fantasyland station was used for stroller parking. However, the Fantasyland station was later demolished for a Tangled-themed restroom. Twenty years later and at the beginning of fall 2019, we will have an incredible new way to travel around Walt Disney World Resort! I’m in total awe with this new transportation system

These gondolas will be full of the classic Disney style. Some of them will feature Disney characters and figures from Disney’s attractions and films. Some of these are Lilo and Stitch, Moana, Zootopia, Ralph Breaks the Internet, Finding Dory and more. You will be gliding away in the Skyliner gondolas, comfortably seated on a wooden bench that fits up to 10 people. Each trip will make it easy and fast for visitors to get to and from their destinations. Rides will last anywhere from five to fifteen minutes. The views will be many and varied, with elevations being anywhere from fifteen to sixty feet off the ground. It’s an exciting new way to get around the parks! 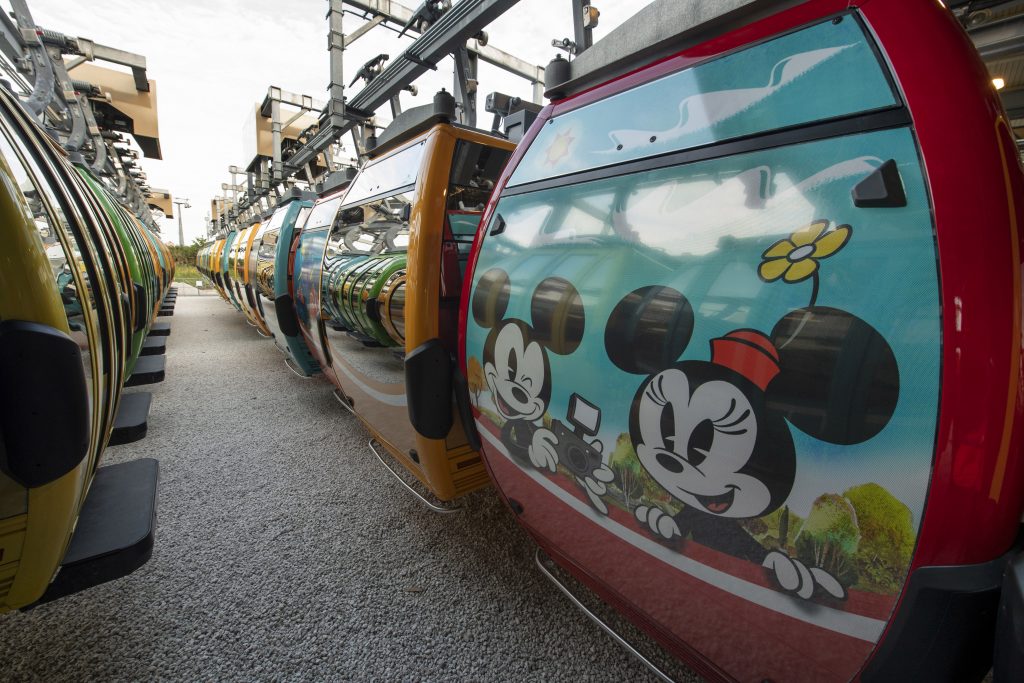 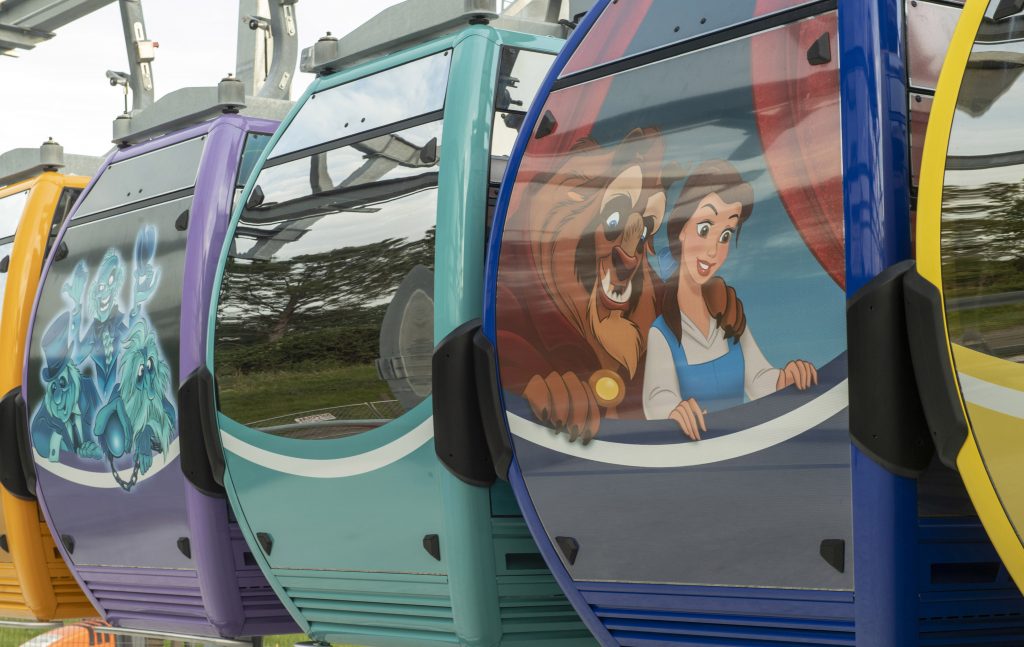 With Disney Skyliner Gondola system, guests can travel around Walt Disney World in an entirely new way. However, Disney’s Hollywood Studios will be the only other park stop for the Disney Skyliner gondolas. Just imagine the amazing view of the Tower of Terror! There will be six Skyliner access stations. These stations will connect you from Hollywood Studios and International Gateway at Epcot to Disney’s Caribbean Beach Resort, Disney’s Art of Animation Resort, Disney’s Pop Century Resort, and Disney’s Riviera Resort. In addition, the gondolas will connect to Disney’s Yacht Club Resort, Disney’s Beach Club Resort, and Disney’s BoardWalk Inn. Nice right? 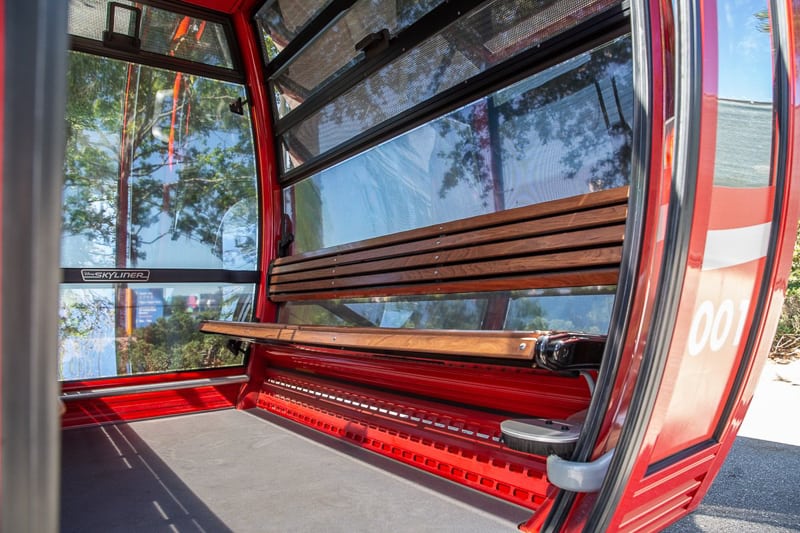 Will Disney Skyliner Gondolas be Air-conditioned?

The Skyliner gondolas will not be air-conditioned, but rather have an air-flow system. I am so curious about how this will work out. It is SUNNY, HOT Florida after all. This year in May the temperatures were in the 100s! However, Disney has commented that the air-flow system should be just fine. For those guests with strollers, on wheelchairs or requiring assistance, an important detail to be aware of is that the gondolas don’t stop. They are constantly moving as they enter and exit the station, so make sure to find the designated line. 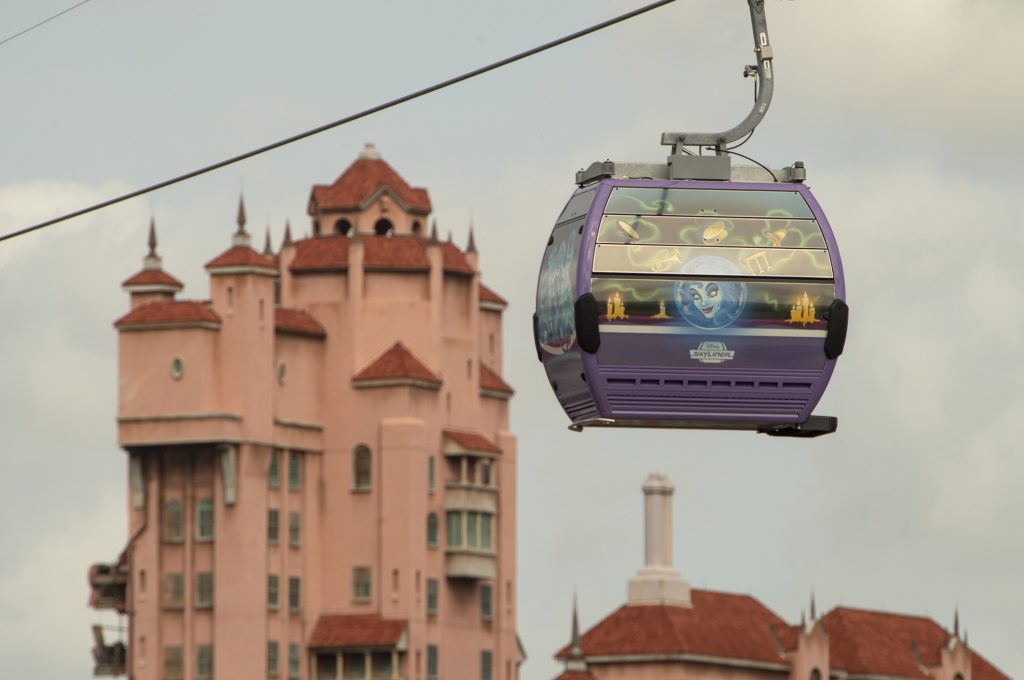 Many of us visit the parks and plan out every single detail of our trip to make the most of it – except for transportation around the park. Some of those that have never been to Disney before, underestimating the sheer size of the park. It’s a really huge magical place. That’s why it’s important to know how to get around the park easily. There are a variety of transportation options at Disney to help make your experience at the parks more enjoyable and less stressful. Choose from the classic monorail, water taxis, buses, and more, Disney transportation options are designed to make any trip to Disney as easy to navigate as possible. 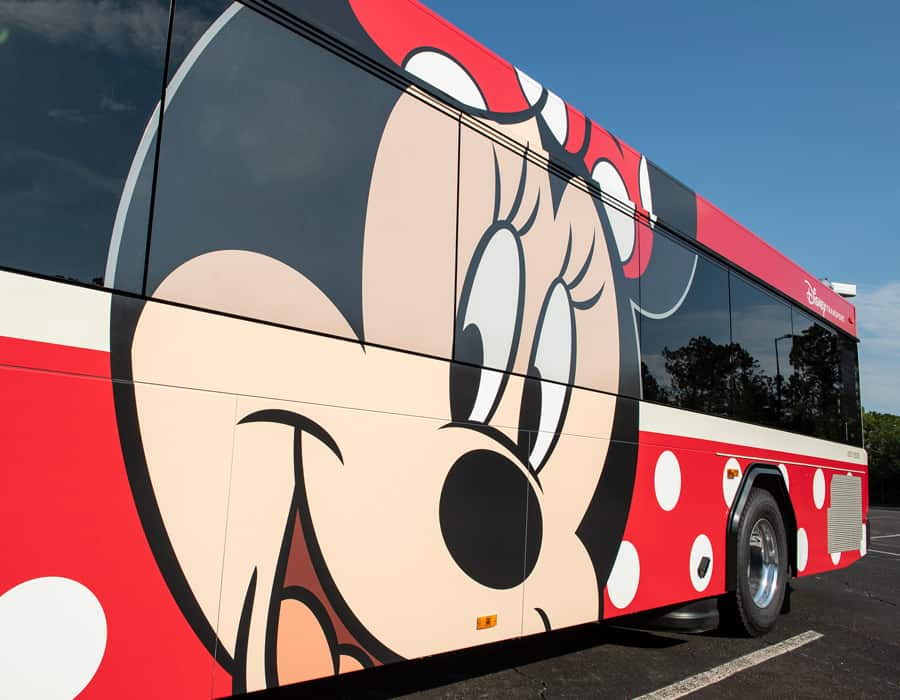 Guests of select Disney resort hotels can take advantage of complimentary bus service. These air-conditioned buses travel to and from all 4 theme parks, 2 water parks, the resort hotels, and the Disney Springs area.

Guests of certain resort hotels can enjoy a ride to certain destinations by ferryboat or water taxi, enjoying the water and wind as they make their way to their next stop. 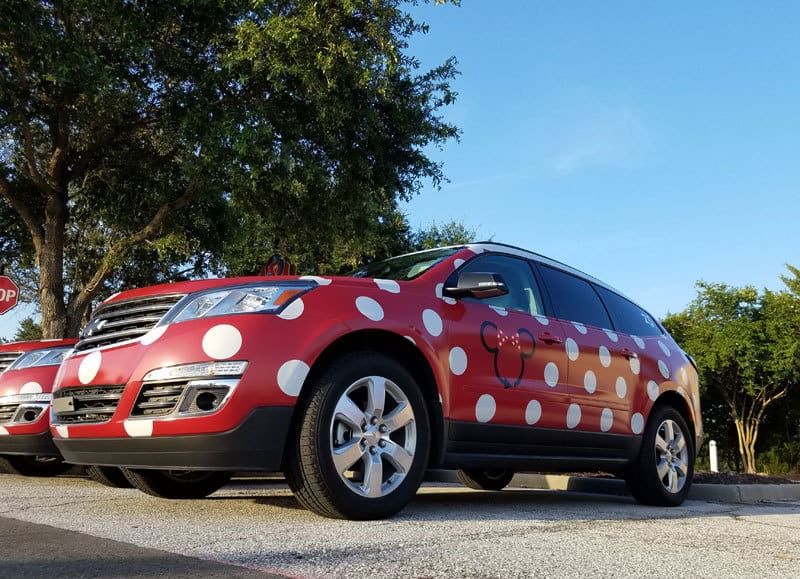 In a hurry? Need to get to a restaurant reservation at another Disney Resort hotel? Looking for a relaxing way to get back to your room after a day at the theme parks or the Disney Springs area? Open up the Lyft app and request a personal ride with Minnie Van Service!  Minnie Van Service is a great way to get around Walt Disney World Resort quickly and in comfort all while in a Disney-owned, Disney-operated vehicle. 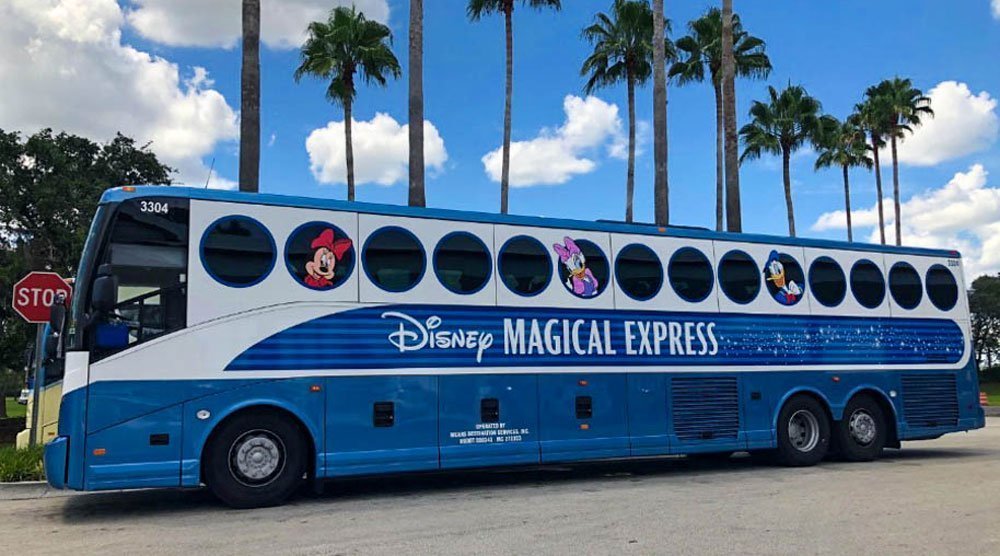 Disney Skyliner Gondolas are One of Many Transportation Options

With this new gondola system, Disney has raised the bar for its transportation network. I’m really excited to give this new way to travel around the parks a try. When you combine that with all the other existing options at Disney, it’s easier than ever to explore their vast theme park.

Whether you choose the monorail, gondola, or one of the other many Disney transportation options, it’s easy to get around Disney. With all these options, your days of limping home on sore feet after a day at the park are over. And with the time you save using these various modes of transportation, you and your family can have more time to enjoy all the park has to offer. The best way to enjoy Disney is to enjoy it smarter, and these options help you do that. I for one, am incredibly excited to try out the new gondola system that’s being added to Disney’s transportation options. I’m eager to see the park from up in the air, so get ready to glide above the treetops and add an extra dash of pixie dust to your day.

Are you excited about the Disney Skyliner Gondolas? Check out these amazing deals! 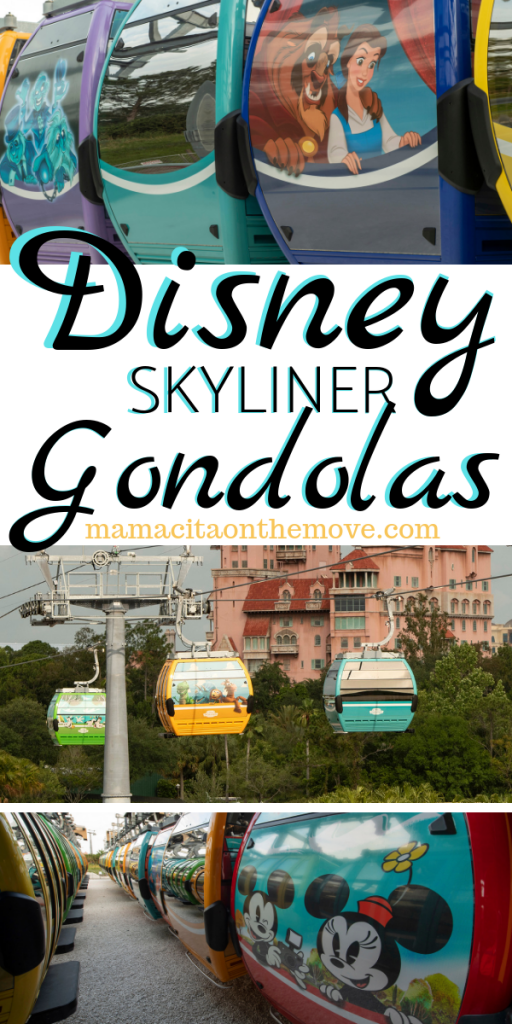